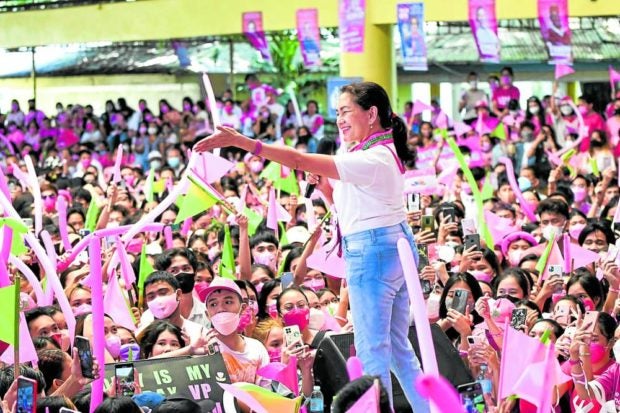 MANILA, Philippines — At the proclamation rally of the Robredo-Pangilinan tandem in Naga City on the night of Feb. 8, a woman candidate confidently walked to the center of the stage and addressed a sea of supporters dressed in the campaign color of pink.

By the middle of her speech, she was working up a crowd of about 20,000 to perform sign language for her main advocacy, “Healthy Buhay at Hanapbuhay” (healthy life and livelihood). And then she led them through shoutouts of a witty catchphrase to remind voters what to do: “Isa pa, Risa pa” (One more time for Risa).

The message hit home. When the dust settled, Risa Hontiveros got what she campaigned for: a fresh six-year mandate as a senator, albeit the sole winner from the opposition.

“I felt like it was almost a miracle that I won. I felt so happy, grateful, and hopeful despite the uncertain future ahead,” she tells the Inquirer in an email interview, as she recalled delivering her proclamation speech. “It was a very emotional moment.”

No stranger to struggle

Hontiveros entered politics in 2004 as Akbayan party-list representative and is no stranger to struggle, having been at the front lines fighting social injustice and pushing for the welfare of the marginalized, mainly women, youth, and persons with disabilities.

In the incoming 19th Congress, she will have to stand her ground in a field dominated by administration senators, under the presidency of Ferdinand Marcos Jr. (A “martial law baby,’’ Hontiveros recalled in a March 2022 interview how her involvement in theater and introduction to women civil society leaders set her on a ‘’path to activism’’ against the dictatorship of his late father and namesake.)

As chair of the Senate committee on women, children, family relations, and gender equality, she shepherded the passage of 20 laws, including the Safer Public Spaces Act, Expanded Maternity Leave Law, and Cheaper and Quality Medicines Law.

On May 6, President Rodrigo Duterte signed one of her pet measures, Republic Act No. 11767, or the Foundling Recognition and Protection Act, which states that foundlings are entitled to the rights and protections accorded to natural-born Filipino citizens.

But apart from the praise she has drawn for the laws she helped pass, Hontiveros has earned enemies — mostly online trolls and syndicate protectors — for her role in Senate inquiries that exposed corruption in certain government agencies.

She led the Senate investigation into what became known as the “pastillas scam,” so named after the rolls of paper bills that resembled a popular milk candy.

The probe uncovered how money changed hands among crooked personnel in the Bureau of Immigration (BI), supposedly for the easy entry and exit of Chinese nationals posing as tourists but intending to work in Philippine offshore gaming operators (Pogos).

The probe has led to the recommended indictment of 27 current and former BI personnel supposedly making up a criminal syndicate responsible for the entry of about 4 million Chinese from August 2017 to January 2020.

The committee found that the thriving Pogos had “exacerbated” prostitution and human trafficking in the country, dragging women and girls into serving “the sexual appetites of an exploding market composed of Chinese workers.

Hontiveros was also active in the Senate inquiry into the Pharmally fund scam, which found that P11 billion worth of contracts for the purchase of pandemic supplies for health workers had gone to an undercapitalized firm, with the purchased items either untraceable, of substandard quality, or grossly overpriced.

In her 18 years in politics, Hontiveros considers the 2022 elections as her toughest yet.

“The campaign for May 2022 could be the most difficult and valiant so far: we’re in the opposition, there’s an unprecedented pandemic and recession, we barely had resources and did not enjoy the political support of the administration,” she says.

But what dealt the heaviest blow to the opposition, apart from the defeat of its standard-bearer, Vice President Leni Robredo, was the scourge of disinformation.

“We had to fight the lies, fake news, and disinformation against me along the way,” Hontiveros says.

One prominent “falsehood” about the senator, mainly circulated on YouTube and Facebook, was that she pocketed P15 million when she was director of the Philippine Health Insurance Corp. in 2015. Last November, she was rapped for alleged sedition and perjury by a Pharmally employee, after she exposed, based on a whistleblower’s testimony, how the company supposedly tampered with the expiry dates of personal protective equipment it had sold to the government.

With her election victory, Hontiveros is relieved that the attacks on her were futile. “I thank God for my campaign team and the whole people’s campaign. We had to work really hard for this victory,” she says.

She wishes that she had done more in recent years, and is now making it a personal crusade to fight disinformation.

“In the next couple of years, the battle for truth will intensify. I have taken stock of what happened, and I know what we are up against,” she says. “Now, we can see how deeply damaging mis- and disinformation is, not just for myself, but for our democracy.”

Hontiveros concedes that the opposition needs to craft better strategies and be “more decisive” in fighting the “relentless fake news epidemic.”

Knowing that the odds were stacked against her, Hontiveros’ team had to mount a campaign strategy on meager resources. “Even before the elections, I had said I was very open to gaining new allies toward a broader unity. So, to open new opportunities, planning became an integral part of our operations. We had to visit as many localities as possible, especially those identified by surveys as where I was weak or had few or no supporters,” she says.

With the latest surveys showing her on the edge of the winning circle, Hontiveros says her team focused on “strengthening our presence and covering more ground” in the “Lingayen-Legazpi Corridor”—or the vote-rich provinces stretching from Pangasinan in the Ilocos to the provinces in Central Luzon and Calabarzon (Cavite, Laguna, Batangas, Rizal, Quezon), National Capital Region and down to Bicol.

“If I had lost in those areas, I would not have been able to speak to you today. I am proud of my campaign team and the way we held everything together,” she says, adding: “Of course, we had to do all this while strengthening our core supporters. They are the bedrock of my victory. They held strong and hard and I am so happy to continue to have their trust.”

Hontiveros has realized that her first term is not enough: She needs more time to pass the “Lingap para kay Lolo at Lola Act” and the Sexual Orientation and Gender Identity Expression bill, one of the hotly debated measures in the 18th Congress.

But how sure is she that she can push her pet bills in the incoming Senate? “I continue to place my trust in the Senate as an independent collegial body, and I am positive that there will always be legislators within our chamber with whom I can find common ground,” she says.

She is optimistic about working with other senators to push the passage of key laws: “And I have to, as I would not have been able to pass over 20 laws under a Duterte administration if it were not for my colleagues’ openness to work with each other.”

And while the Senate may be a “constricted space” for the lone opposition lawmaker, she is confident of taking the battle in other arenas in the hope of changing the status quo.

“Allies are everywhere. As we’ve seen in this campaign season, there are bigger components in society, such as the people’s movement, other institutions like the Church, [nongovernment organizations], and various communities that I know will continue to help maintain the checks and balances in government,” she says.

Hontiveros cautions against viewing the Senate “as though it is the only space for opposition.”

“I do believe that, while I look like I am alone in the chamber, the Filipino people will be with me to battle it out when needed,” she says.

She sees on the horizon “the most exciting part.”

“I’m excited to once again work and collaborate with various sectors and communities whose very issues and stories give our laws their beating hearts. And I also hope to continue giving free medical services nationwide courtesy of our Healthy Pinas mobile clinic,” she says.

Hontiveros looks forward to authoring and passing more laws, particularly for the most vulnerable. “It’s been a true joy and pleasure seeing our bills become laws, especially since we share every bit of success with the many advocates, civil society organizations and individuals that help us craft these policies,” she says.

She hopes that the next six years will not be a constant skirmish, but an opportunity to shine light on and uplift the lives of Filipinos.

“We began our preparation for the 2022 elections as early as the 2019 elections, after the loss of all Otso Diretso candidates,” he says. The opposition’s dismal performance prompted Hontiveros’ campaign team to make changes, including an overhaul of its communications panel.

“It took us one-and-a-half years to slowly reverse the impact of the negative campaign against Senator Risa, and once we were able to lessen the negative numbers, we just hung on from there,” Albert says.

‘We have to survive,’ says Hontiveros of Senate opposition bloc