Palace: No issue if Marcos makes Duterte his ‘drug czar’ 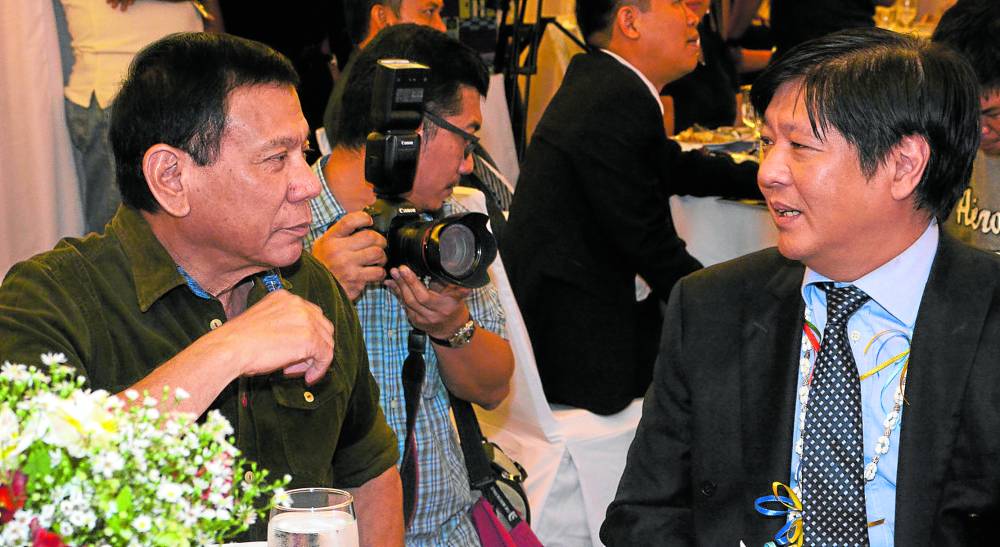 CONTINUE THE WAR President Duterte chats with then Sen. Ferdinand Marcos Jr., his elected successor, in this 2015 picture taken in Cebu. Marcos says he was open to having Mr. Duterte continue to lead the war on drugs, which the outgoing president started in 2016. INQUIRER PHOTO

There would be no legal hurdles to President Duterte’s appointment by his successor as leader of the campaign against illegal drugs which he started, Malacañang said on Friday.

Mr. Duterte has not indicated that he was still interested in leading the war on drugs, which had been condemned for its brutality and for which he faces charges of crimes against humanity in the International Criminal Court (ICC).

President-elect Ferdinand Marcos Jr. on Thursday told a select group of journalists that he was “open” to appointing Mr. Duterte, “if he wants to,” as his drug czar.

“When it comes to that, there is no legal impediment for a former president to assume an executive position in the executive branch,” said acting deputy presidential spokesperson Kris Ablan.

“Now whether President Duterte will accept, that is up to him,” Ablan said.

Marcos did not say whether there would be such a position in his administration. But he said Mr. Duterte, with whom he held “several” meetings before the May 9 elections, asked him to continue the drug war.

He said the President was “very assertive.”

“He said, ‘Continue it. Do it your own way, change it, but do not leave it because our youth will be miserable. Their lives will be ruined,’” Marcos said, quoting Mr. Duterte.

“I fully appreciate what he said,” Marcos said. “And of course, the drug problem in the country continues to be a problem so we must continue to look that way.”

Ablan pointed out, however, that Mr. Duterte was “looking forward to his retirement.”

In February, Mr. Duterte said that he was already packing up and preparing to leave Malacañang.

He said he was looking forward to June 30, his last day in office when he would turn over the reins of government to his successor.

In March this year, Marcos said Mr. Duterte’s war on drugs would continue should he win as president, and that he would be going after the “big guys” instead of the small players.

In April, Mr. Duterte admitted that he was unable to end the country’s drug problem, which he promised to stop in three to six months after he took office in June 2016.

But he warned drug lords that “I will forever remain your enemy.”

He said that the incoming administration should “be able to kill the drug lords without mercy.”

The Philippine National Police on Friday reminded all police commanders to continue the “aggressive” anti-illegal drug operations, claiming that there were concerns that these would “weaken” after Mr. Duterte’s term ends.

This time, the antinarcotics campaign will employ a “new strategy” that will focus on rehabilitation and reintegration for drug dependents, according to Police Maj. Gen. Valeriano De Leon, the PNP’s director for operations.

De Leon believes the war on drugs will be strengthened “and we will get the necessary support in our fight against drugs” from the new administration.

“The incoming president will surely appreciate what President Duterte has started and I’m very certain that President Marcos knows the ill-effects of this [drug problem],” De Leon said in a statement to reporters.

He said “some groups and individuals” were concerned about the future of the war on drugs under the Marcos administration.

De Leon promised that “we will be ceaseless and we will even intensify” the drug war.

There was no clear explanation of how the PNP would implement the new antidrug strategy but De Leon said it would be centered on programs for drug dependents to make them “useful to the society.”

“Like I said, we will intensify the drug war so that the new administration can focus on having a better Philippines while we are focused on peace and order, especially on this plague, which is drugs,” De Leon said.

Data from the Philippine Drug Enforcement Agency (PDEA) show that 6,235 individuals have been killed in police antidrug operations since 2016. Human rights groups say the real number was closer to 30,000.

The Commission on Human Rights (CHR) said in a 48-page report that police had used “excessive and disproportionate force” in most of the drug-war-related incidents that the agency had investigated.

The report also found that 73 percent of the 511 victims of “nanlaban”—a common term used by the police to refer to drug suspects who resisted arrest—were killed with multiple gunshots.

The drug war killings by the police and by suspected state-sponsored vigilantes were to be investigated by the chief prosecutor of the ICC, but this was suspended in November last year upon the request of the Philippine government.

In January this year, Marcos said that if he wins the presidency he would bar ICC prosecutors from coming to the country to investigate Mr. Duterte.

“We have a functioning judiciary, and that’s why I don’t see the need for a foreigner to come and do the job for us, do the job for our judicial system,” he said.

PDEA reported in February this year that since 2016 the authorities have seized nearly 10 tons of “shabu” (crystal meth) worth P63.43 billion, plus drug laboratory equipment and other narcotics like cocaine, ecstasy and marijuana, with a total value of P76.01 billion.

In addition to those killed, 331,694 suspected drug offenders were arrested in 220,868 antidrug operations during the period. —WITH A REPORT FROM INQUIRER RESEARCH