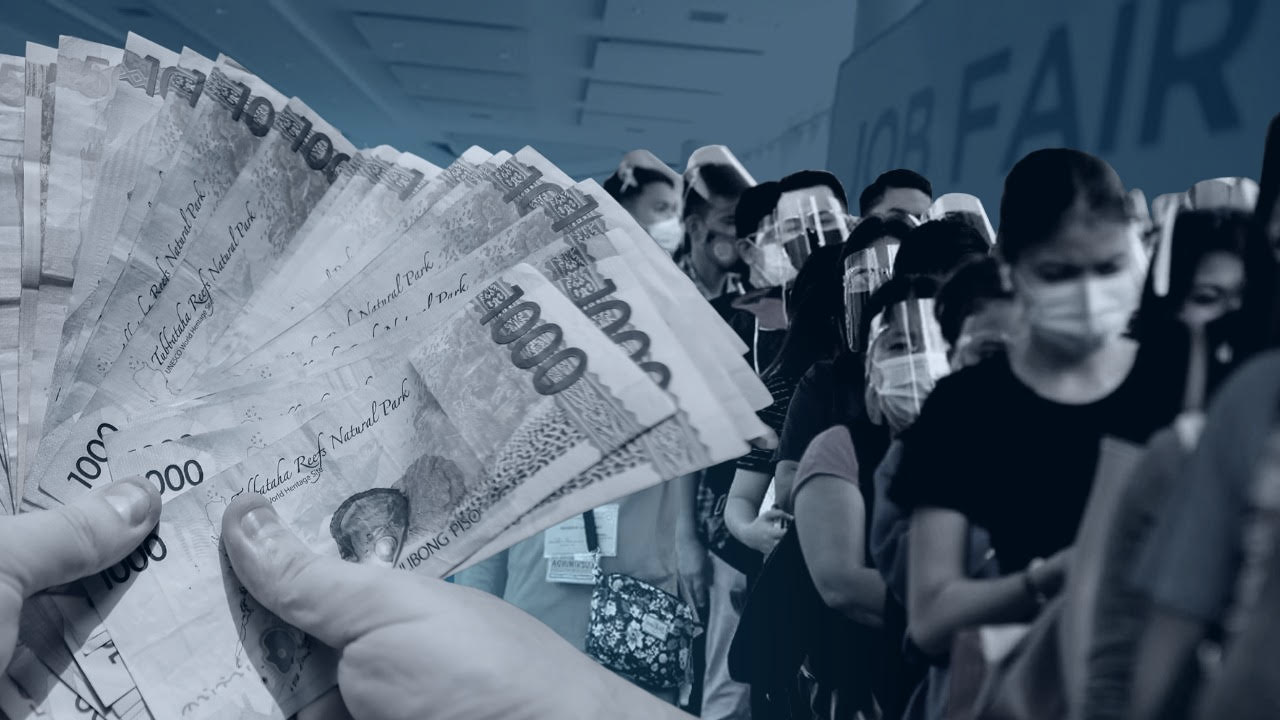 MANILA, Philippines—Next week, the P33 and P55 wage increase in Metro Manila and Western Visayas will take effect, but the Commission on Population and Development (Popcom) is still hoping that the incoming Marcos administration will provide a living wage to workers.

The Western Visayas Regional Tripartite Wages and Productivity Board (RTWPB) also increased the minimum wage in private establishments with more than 10 employees—from P395 to P450. 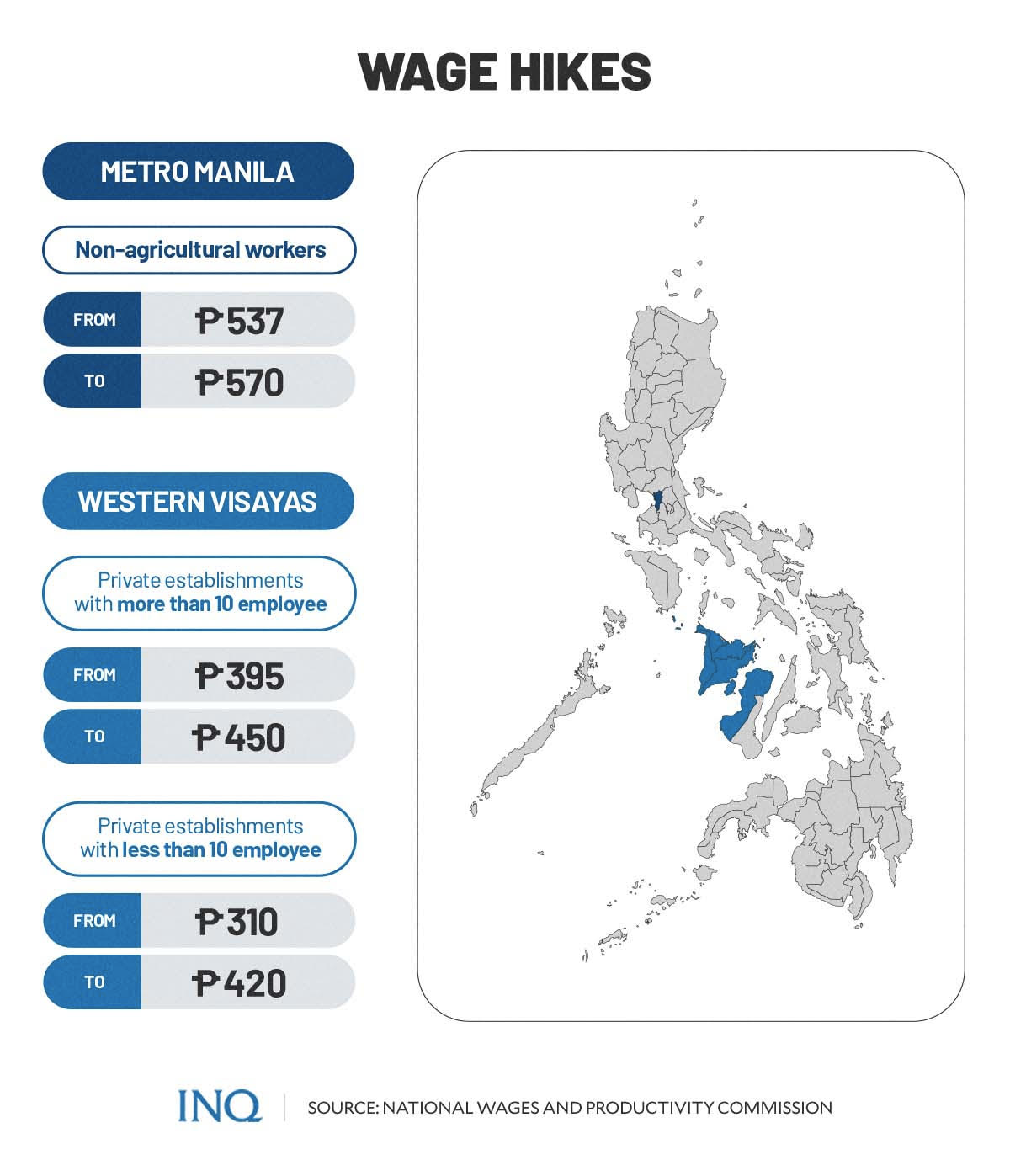 Popcom Undersecretary Antonio Perez III said on Thursday (May 26) that the minimum wage covers only a small portion of the needs of Filipino families.

“That’s why we’re proposing to the Popcom board to think of having a living wage or a wage that addresses the cost of living,” he said.

He said he hoped that it would be considered as well by the Marcos administration: “This means that we should have as many effective workers as consumers to improve the situation of families.”

The Ibon Foundation said last March that in Metro Manila, a family of five would need an income of at least P25,252 every month to live through each day. The minimum wage then was only P537 a day, far from the needed P1,072 a day. 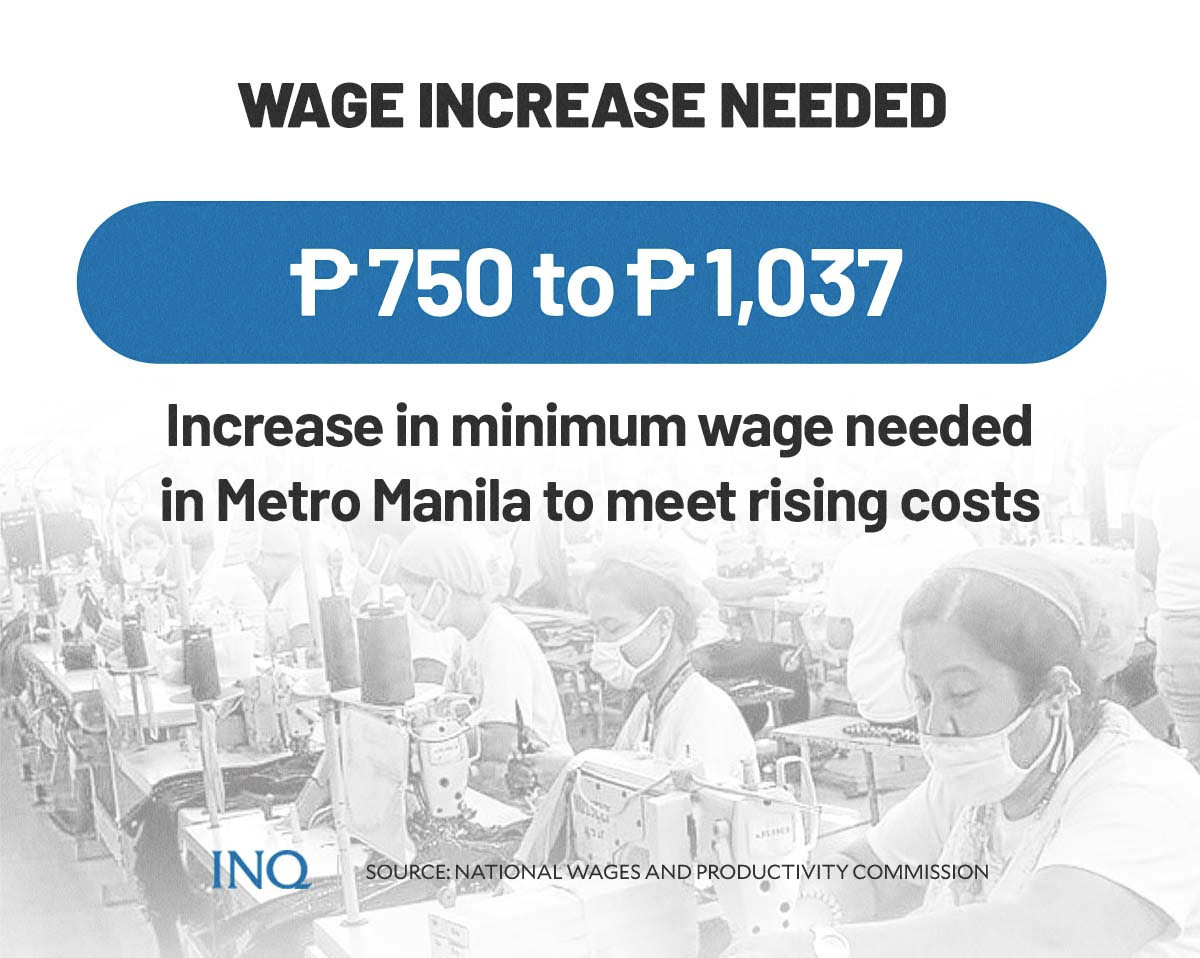 Breaking down the living wage, Ibon Foundation said at least P12,196 will be for food, P4,141 for house rent, P2,416 for water, electricity and gas, P1,587 for miscellaneous goods and services, and P1,320 for transportation.

Families can spare P459 for furnishings and routine household expenses, P441 for communication, P431 for health expenses, P421 for clothing and footwear, and P319 for heavy-duty furniture and equipment.

Ibon Foundation said families may also spend P305 for special family occasions, P273 for education, P181 for alcoholic beverages, P99 for recreation and culture, P381 for savings, and P282 for other expenses.

However, as the inflation rate in Metro Manila spiked to 4.4 percent in April, the living wage in the region likewise grew to P1,087 per day. For Ibon Foundation, the region’s minimum wage is falling even behind the living wage, stressing that a meaningful increase is more urgent than ever for genuinely inclusive recovery. 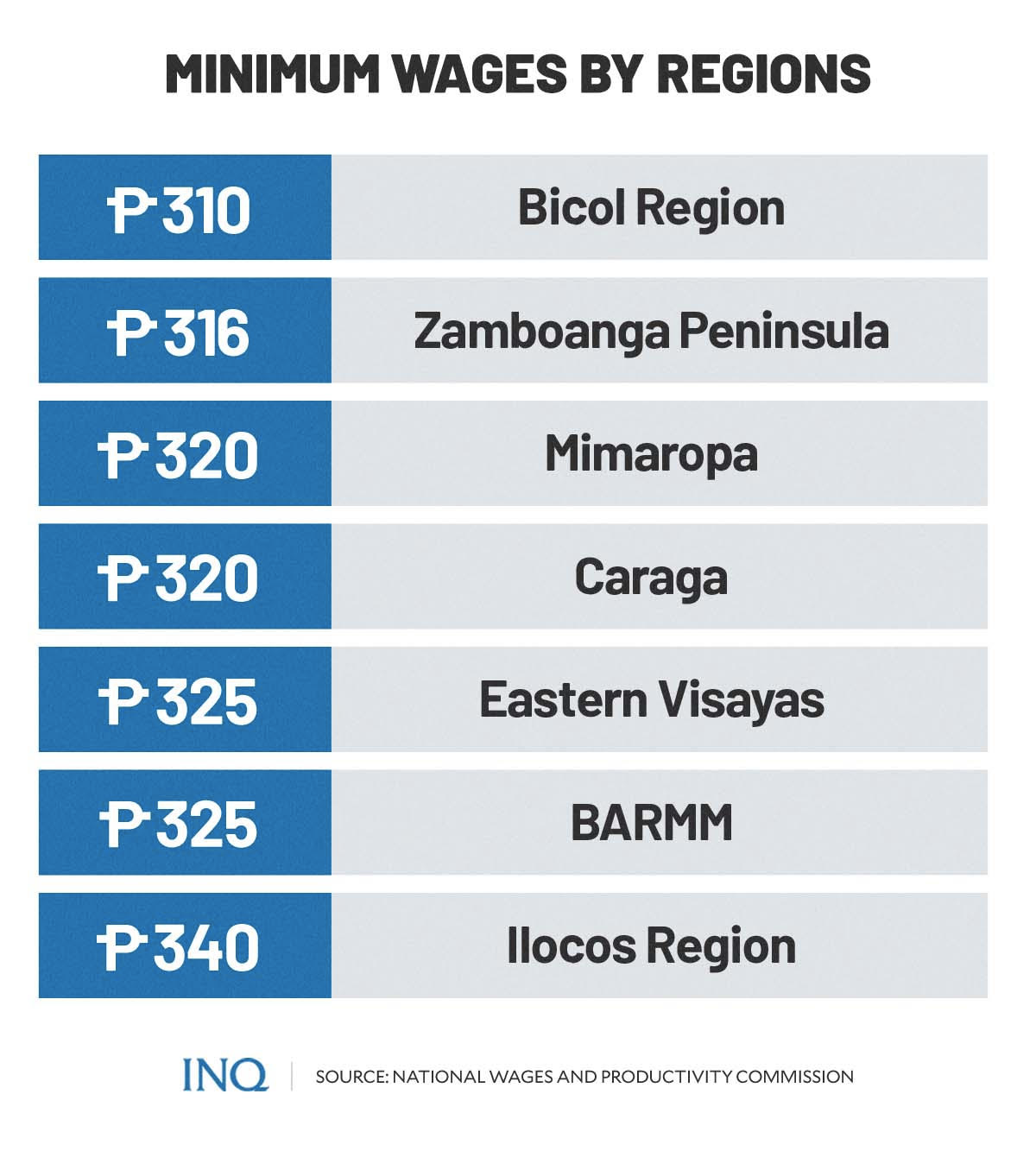 It said Metro Manila inflation rate increased substantially to 4.4 percent in April 2022 from only 1.3 percent in January, especially on the back of rising global and domestic oil prices. The April 2022 inflation is already at its highest since the 4.6 percent rate in January 2019.

With prices rising more and more rapidly, the value of stagnant minimum wage in Metro Manila, which is presently P537, has fallen to less than half—49 percent—of the living wage in the region.

“This means that wage-earning households are continuing to suffer losses in real incomes and purchasing power even as the economy reopens,” it said.

Ibon Foundation stressed that the government should consider increasing the minimum wage in Metro Manila to P750 up to as much as P1,037, saying that this will bring wages much closer to the estimated living wage.

It stressed that the P33 wage increase in Metro Manila, which will take effect on June 4, will only bring the P537 to P570, still barely half—52.4 percent—of the living wage that a family of five needs to live decently.

However, while the Popcom and Ibon Foundation were calling for a living wage, businessmen in Western Visayas only wanted a P35 to P45 wage increase instead of P55 to P110.

“The RTWPB committed grave abuse of discretion in imposing whimsical and arbitrary wage increases in Western Visayas,” the Metro Bacolod Chamber of Commerce and Industry said. 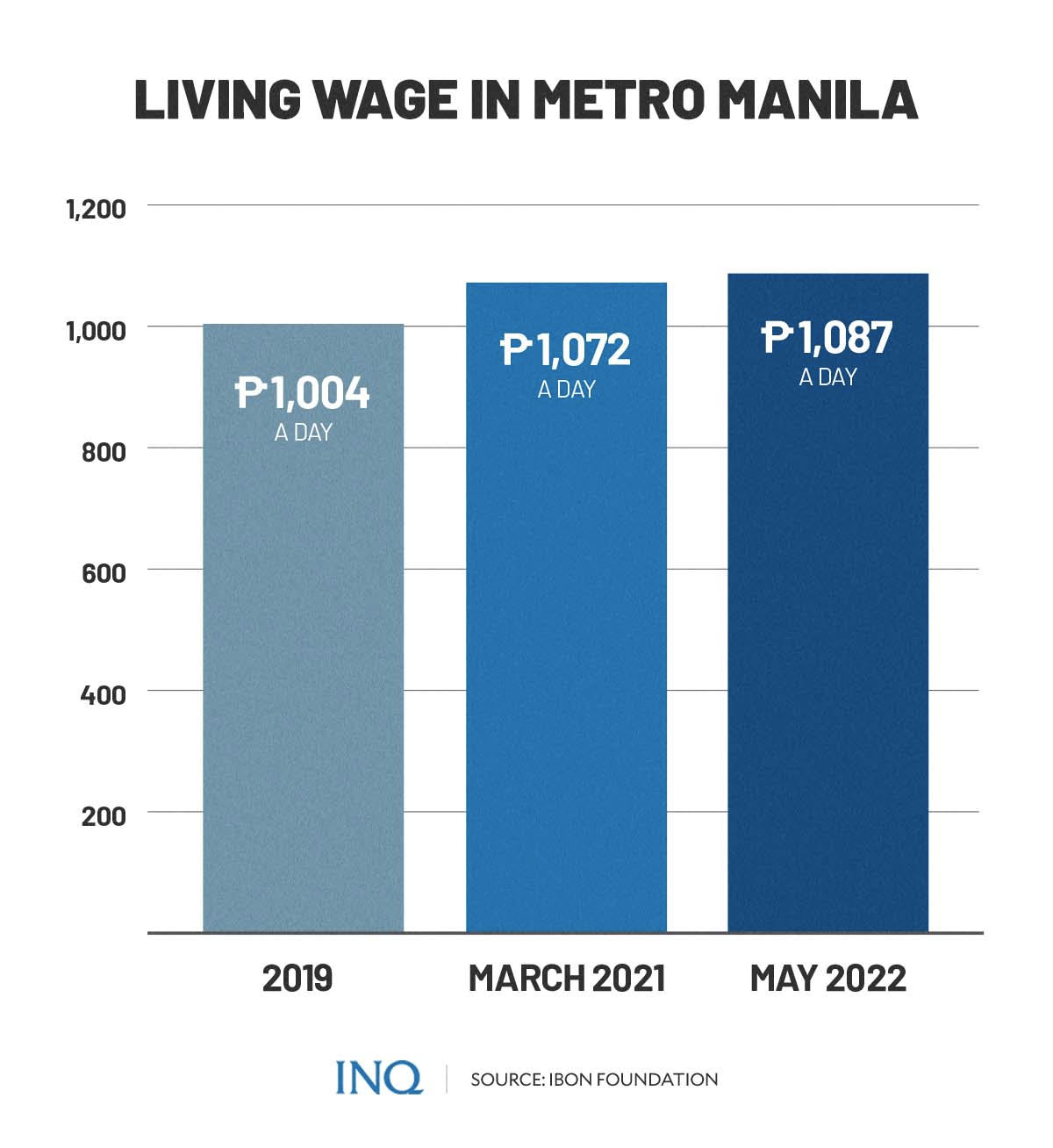 It said the wage increase approved by the RTWPB would result in “business reverses, losses, closures and corresponding increase in unemployment.”

Last March 5, president-elect Ferdinand Marcos Jr. promised to provide workers an increase in wages in a recovered economy, saying that business owners may oppose major wage hikes at this point considering the current state of the economy that has suffered from the COVID-19 pandemic.

But for Ibon Foundation, the government should stop seeing high wages as a barrier to economic development and, on the contrary, consider this a sign of progress because it indicates that the fruits of economic growth are becoming more equitably distributed.

“Wage hikes, including further government support to smaller enterprises to be able to afford this, will substantially boost aggregate demand and economic recovery, the group stressed,” it said.