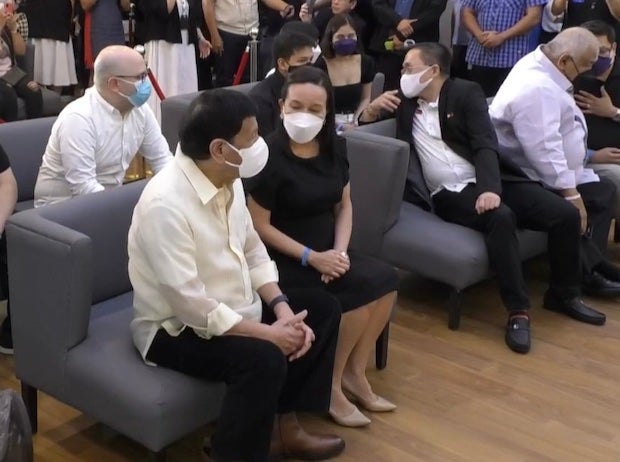 President Rodrigo Duterte chats with Sen. Grace Poe at the wake of her mother, veteran actress Susan Roces on Wednesday, May 25, 2022. (Photo by DAPHNE GALVEZ / INQUIRER.net)

MANILA, Philippines — Outgoing President Rodrigo Duterte attended on Wednesday night the wake of film icon Susan Roces, fondly known as the “Queen of Philippine Movies,” who died on May 20.

The wake is being held at the Heritage Park in Taguig City. It was the last night of public viewing when President Duterte made his visit.

Before going to the wake, Duterte was in Malacañang for the ceremonial receiving of the credentials of the ambassadors from Cambodia, Indonesia, Argentina, and Greece.

He was unable, though, to attend the proclamation of his daughter, Vice President-elect Sara Duterte-Carpio, at the Batasang Pambansa Complex even though he had endorsed his daughter’s candidacy.

Back in 2016, Duterte did not attend even his own proclamation when he won the presidency.