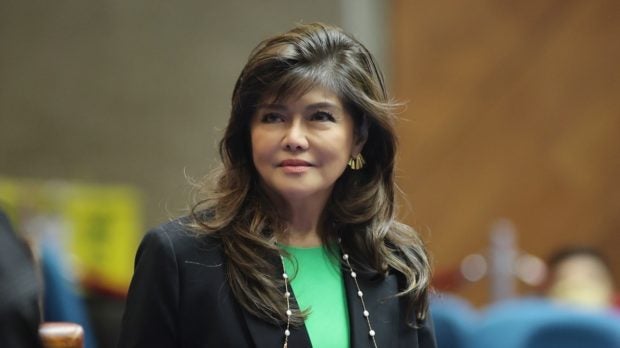 MANILA, Philippines — Sen. Imee Marcos slammed the Department of Agriculture (DA) for supposedly trying to pull off a “midnight deal” to import fish to the detriment of local fishers.

Marcos, chair of the Senate committee on economic affairs, criticized Agriculture Secretary William Dar for signing on Monday Administrative Order No. 10-2022 which allows the importation of 38,695 metric tons of small pelagic fish, like galunggong (round scad), sardines and mackerel.

The senator accused Dar of contriving a shortage to justify the importation and ignored, even without a cursory explanation, the recommendation of the National Fisheries and Aquatic Resources Management Council (NFARMC).

“The DA’s midnight madness goes on, from contriving a shortage earlier this year while a large supply was still in storage to bypassing outright the NFARMC,” Marcos said.

Marcos expressed dismay at the insistence of Dar, who has 35 days remaining in office, to import fish when local fishers are still struggling to recover from a series of typhoons last year and the agricultural import policy of the Duterte administration.

Due to fish supply shortfall

“The closed fishing season is over and our local fishermen are back to their livelihood, so why is the DA issuing CNIs (certificates of necessity to import)?” the senator said.

Dar told reporters on Monday that he signed the CNI because of a supposed fish supply shortfall of about 90,000 metric tons this year, based on the analysis of the Bureau of Fisheries and Aquatic Resources (BFAR), the agency that ignored the NFARMC in January.

Marcos said the DA did not even bring up the new importation during the council’s meeting on April 29 and Jaydrick Yap, an NFARMC member and president of the Southern Fishing Deep Sea Corp., said the new CNI was “never discussed” during the meeting.

But, Marcos said, the Fisheries Code requires the DA to consult with the NFARMC on decisions affecting stakeholders in the fishing industry.

“As far as the commercial fishing and aquaculture industry is concerned, there is no shortage in local fish supply and any increase in fish prices would be due to rising fuel costs,” Marcos said.

The senator made no mention of Dar’s offer earlier this month to serve as agriculture secretary of the incoming administration of Imee’s brother, President-elect Ferdinand Marcos Jr.

“I am offering my services to the country and the new leader. If they really consider that, then that will be good. If not, I have many things also to do,” Dar told economic journalists on May 11.