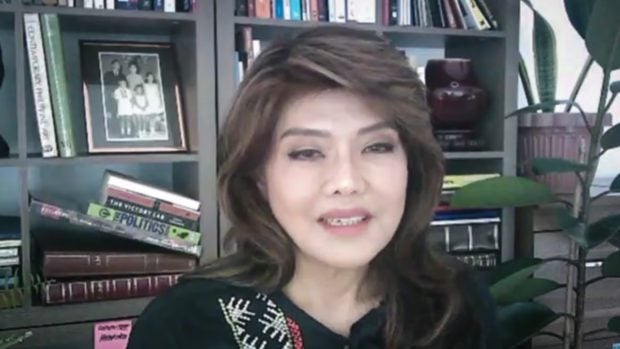 MANILA, Philippines — Senator Imee Marcos, sister of presumptive president Ferdinand “Bongbong” Marcos Jr., said their family is “very, very grateful” for the second chance given to them  by the Filipino people, as she claimed they have been “oppressed” and “mocked” for years.

During Congress’ canvassing of votes for the presidential and vice-presidential elections on Wednesday, Marcos said her family has been supposedly on the wrong end of cases and criticisms, implying that her younger brother’s election as president is another chance for their family.

Ferdinand Marcos Sr., the country’s 10th President, was toppled via a bloodless uprising known worldwide as the People Power Revolution in 1986 amid martial law and massive corruption hounding his administration. The Marcoses flew to Hawaii and eventually faced a slew of graft and corruption cases following the discovery of huge amounts of ill-gotten wealth by the Marcos family.

Imee Marcos, the eldest among the three biological children of Marcos Sr. and former first lady Imelda Marcos, was at the House of Representatives as she was one of the Senate’s delegates for the joint session of Congress. She said she was at the canvassing as she chairs the Senate committee on electoral reforms.

Asked what role she would play once her younger brother Bongbong is inaugurated as the 17th president of the country, Imee Marcos said she would be a “super Ate” (great elder sister).

She also underscored the importance of having an executive and legislative branches of government on good terms, noting that outgoing President Rodrigo Duterte’s administration enjoyed such relationship with Congress.

“We have a more harmonious relationship, I think it’s not a secret that President Duterte has experienced (this),” she added.

Bongbong Marcos has not yet been proclaimed but he is leading in the partial and unofficial count of the Commission on Elections (Comelec) with more than 31 million votes.

Congress, sitting National Board of Canvassers for presidential and vice presidential votes, is poised to proclaim the winning candidates this Wednesday.

On Tuesday, Bongbong Marcos’ chief of staff, lawyer Vic Rodriguez, said that the presumptive president would be attending the proclamation at the House of Representatives.