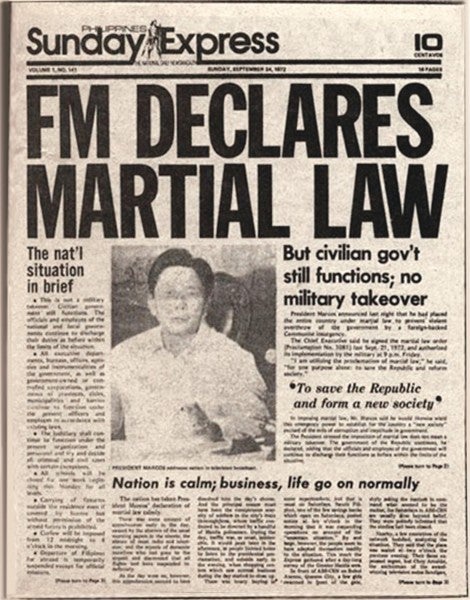 DARKNESS FALLS ON THE PHILIPPINES | The Philippine Daily Express, then a tabloid, announces the declaration of martial law on Sept. 21, 1972. INQUIRER ARCHIVES

MANILA, Philippines — Here are some fast facts about martial law, which was declared in 1972 by then-President Ferdinand Marcos, father of presidential candidate Ferdinand “Bongbong” Marcos Jr.

Years later the older Marcos was ousted by People Power, the 36th anniversary of which will be commemorated this week.

3,240 killed by the military and the police

11,103: Victims of rights violations with approved claims for compensation from the Human Rights Reparation and Recognition Act of 2013, per the Human Rights Violations Victims’ Memorial Commission464: Closed media outlets after declaration of martial law

$5 billion-10 billion: Estimated ill-gotten wealth of the Marcoses during two decades in Malacañang