Forum: Martial law is not being properly taught, analyzed in class 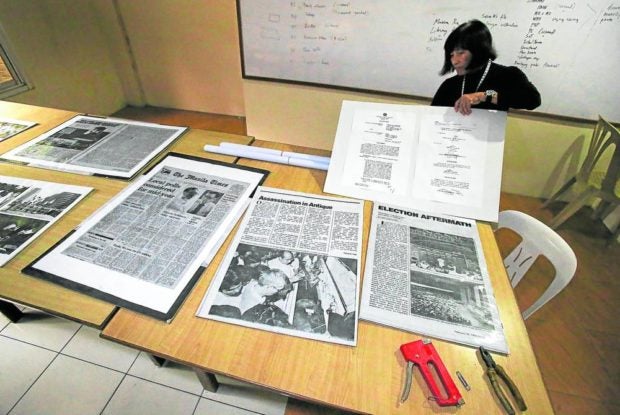 FIGHT AGAINST FORGETTING | A staff member at Bantayog ng mga Bayani Museum in Quezon City on Tuesday prepares newspaper and magazine clippings on the key events leading to the 1986 Edsa People Power Revolution for an exhibit starting Wednesday marking the 36th anniversary of the peaceful uprising that ended the Marcos dictatorship. (Photo by LYN RILLON / Philippine Daily Inquirer)

These were some of the words used by college students in describing what they learned about martial law in their high school history classes.

Nancy Kimuell Gabriel, a professor at the University of the Philippines Diliman who is teaching a course focused on martial law, said that according to many of her students, that dark period in Philippine history was generally portrayed as the golden age of the economy.

“The method of teaching was also inaccurate, and they were not taught … about the atrocities that happened,” Gabriel said on Tuesday in an online forum organized ahead of the 36th anniversary of the Edsa uprising that restored democracy in the country.

She said that based on the 67 essays she had gathered in teaching the course Philippine Studies 21 for four semesters, the students’ dominant experience was that: martial law was not taught properly; they were tasked to memorize dates and proclamation numbers; and they were not taught how to think critically about the period.

In terms of content, the students said they were not taught about the military atrocities and human rights violations that occurred during martial law, Gabriel said.

Among the other narratives they learned, she said, were that then-first lady Imelda Marcos was pro-people (“makamasa”); that dictator Ferdinand Marcos was smart and that it was his wife who was greedy; and that Marcos was an admirable lover for building the San Juanico Bridge for his wife.

Discussing a timeline of the period, Gabriel said the assassination of opposition leader Benigno “Ninoy” Aquino Jr. in August 1983 and his widow Cory’s victory in the “snap election” in February 1986 were seemingly highlighted as the only important events during that time.

Gabriel cited one of her students who took issue with Education Secretary Leonor Briones’ supposed remark that the Department of Education provided information that it was up to learners to analyze.

“That is not a good strategy because the history of martial law is not a mere academic topic where all opinions are correct,” she quoted her student as saying.

At the same forum, Jhoanna Andrea de Leon, who is teaching Philippine history to college students at the National University, recalled the time when she invited activist and martial law survivor Judy Taguiwalo to a webinar on martial law for her class in September 2021.

Before the webinar, Taguiwalo gauged the students’ understanding of the topic by asking them about their views on martial law, and received various responses, including poems, songs, editorial cartoons, and quote cards.

“Except for one who was ambivalent about martial law, the others were critical of Marcos and martial law,” said Taguiwalo, who was present at the forum.

One student cited the song “House on the Hill” by the band Pretty Reckless and said: “I chose this song because [it] is symbolizing [the] government or people who have been dead for centuries but still play an impact in the present.”

The student said the song was about not only the government but also being superior and using power over the weak to do anything it wanted.

“These happen[ed] during the Marcos era; they abuse[d] this power and authority given to them by Marcos to get away from their crime (almost all the blame goes to the leader). Sadly, these mistakes had taken over the good deeds Marcos did for the country,” the student said.

Taguiwalo said the song was a revelation to her because she was “unfamiliar” with it and the band.

“I guess if we [in my generation] asked the students to come up with songs during their time that for them could be related to martial law and the dictatorship, we would at least be able to learn more about the music of this generation and their thinking,” she said.

To relate the martial law period to the continuing past, Taguiwalo juxtaposed the image of Michelangelo’s “Pieta” with the iconic banner photo of the Inquirer in 2016 showing a mother grieving over a victim of the Duterte administration’s war on drugs.

De Leon mused that “when I became an educator, … it shocked me how much information was unknown to me.”

“It also shocked me how much information was withheld when this topic was being taught in primary and grade school,” she said, adding:

“The problems of the Philippines did not end in Edsa [1986]. It closed a dark chapter of the country, but it surely did not solve the issues that are still very much evident until today.”