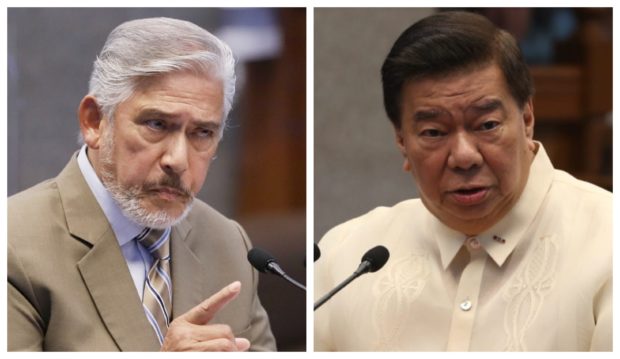 MANILA, Philippines — Senate leaders are seeing no problem with the inclusion of Senator Imee Marcos in the upper chamber’s contingent to the canvassing of votes for the presidential polls even if her brother, Ferdinand “Bongbong” Marcos Jr., is among the candidates.

Senate President Vicente Sotto III said Tuesday the members of the Senate contingent are only observing the counting of the votes cast during the May 9 elections.

The Senate and the House of Representatives designated seven members of each chamber to form a joint committee that should serve as the National Board of Canvassers (NBOC) for the presidential and vice presidential polls.

“We should look it at that way also because what can a relative do? ‘Di naman humahawak ng COC (certificate of canvass) ‘yun basta-basta o hindi naman tagabasa kundi kasama sa committee na ika nga ino-observe ang bilangan,” he added.

Drilon pointed out that questions arising from the elections should be raised to the Presidential Electoral Tribunal and not the NBOC.

“In other words, if the certificate of canvass says [100,000] votes appear to be in favor of candidate x, you cannot claim that the [100,000] votes will not reflect the true voting and question if it’s really correct that they got 100,000. We will have to consider 100,000 in that example as votes cast and will be counted,” Drilon explained.

“Questions arising from that would be brought to the Presidential Electoral Tribunal. Because, again, I would repeat, it is a question of the proper process to be followed,” he added.