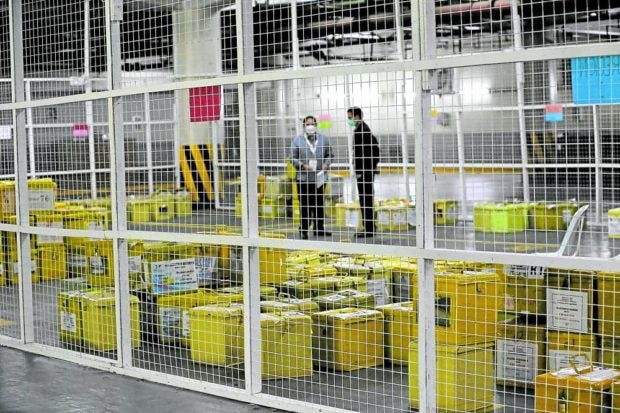 ALL SET FOR THE CANVASS Ballot boxes containing election returns for the presidential and vice presidential elections are kept under tight guard at the Senate building in Pasay City. They will be
brought to the House of Representatives for canvassing by a joint session of Congress next week despite a petition in the Supreme Court not to proclaim Ferdinand Marcos Jr. as the new president.
—RICHARD A. REYES

MANILA, Philippines — The two chambers of Congress convened on Tuesday as the National Board of Canvassers (NBOC) to canvass votes in the presidential and vice presidential elections.

The Senate and House contingents, which make up the NBOC, gathered at the Batasan Pambansa plenary hall for the canvassing of the votes which will make way for the proclamation of the country’s next president and vice president.

Senate President Vicente Sotto III reminded his fellow lawmakers that the primordial task of Congress is to “ensure that the sovereign will of the people expressed through the ballot is respected and upheld.”

“Plus, Congress must determine the authenticity and due execution of the certificate of canvass submitted to it in accordance with applicable laws in an orderly and transparent manner,” Sotto said during the joint session of Congress.

House Speaker Lord Allan Velasco echoed Sotto’s pronouncements, saying that the Constitution mandates them to ensure that the votes of the people are properly counted.

(This is the sacred task given to us by the Constitution—ensuring that the votes for the next leaders of the country are properly counted.)

(In a democratic country, the voice of the people is what should be followed. Our only goal is to have a truthful and peaceful election wherein we protect the ballots and the decision of the voters.)

Zubiri earlier said Congress is eyeing the proclamation of the country’s next leaders by Wednesday, May 25, at the earliest. He, however, assured that they will not “shortcut the process.”

According to Zubiri, presumptive president Ferdinand “Bongbong” Marcos Jr. and leading vice presidential candidate Davao City Mayor Sara Duterte-Carpio have been advised to make themselves available on the said day.

The partial and unofficial count by the Commission on Elections showed Marcos leading the presidential race with over 31 million votes while his chief rival, Vice President Leni Robredo, garnered 14.81 million votes.

Duterte-Carpio is leading with nearly 32 million votes for the vice-presidential race while Senator Francis Pangilinan, who ranks second, has 9.230 million votes.