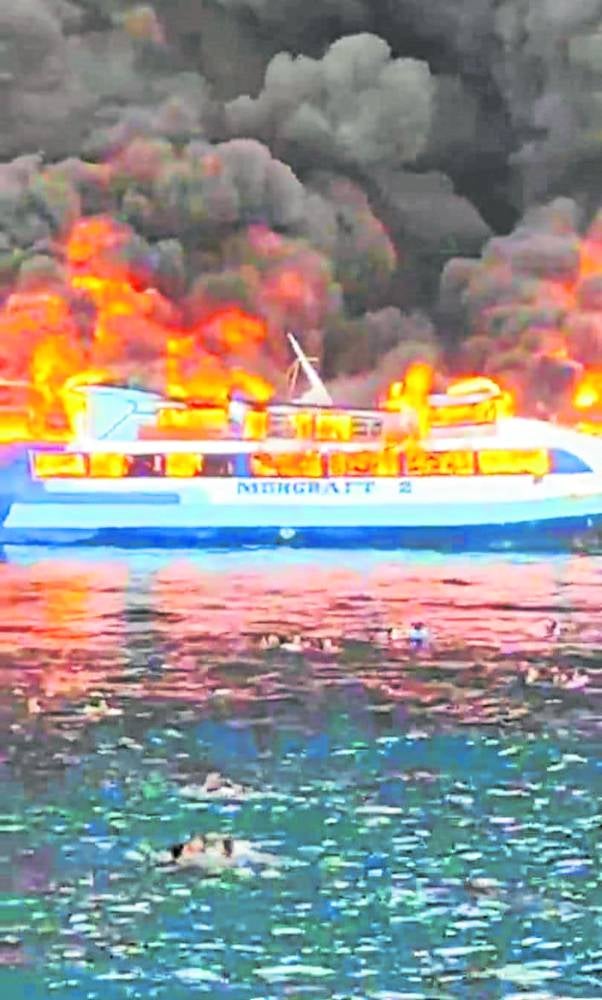 INFERNO Some passengers of MV Mercraft 2 jump into the sea to escape the fire that hit the ferry in Real, Quezon, on Monday. —PHOTO COURTESY OF PHILIPPINE COAST GUARD

MANILA, Philippines — The owners and operators of MV Mercraft 2 may face criminal charges and franchise suspension if investigati0ns being conducted by the Philippine Coast Guard showed negligence on their part that resulted in the death of passengers.

(We’re looking into everything. We’re monitoring the investigation. We have the captain [in custody] and any time, we can also call in the crew members.)

Balilo said the investigation should be completed within one week, after which a report will be submitted to the Department of Transportation.

(Secretary Arthur Tugade has directed them to expedite the investigation, look into all possible angles. And if anyone is responsible for the incident, they should be held accountable.)

Should the investigation reveal negligence on the part of the company, its franchise may be suspended and those liable could face appropriate charges, the spokesman added.

(It’s really alarming since this is the second time it has happened. We don’t want it to happen for a third time.)

On Monday, a fire broke out on MV Mercraft 2 bound for Real, Quezon.

According to PCG, all 127 passengers have been accounted for, including seven confirmed fatalities. Some wounded survivors have been admitted to Clara M. Recto Memorial Hospital, while others are being treated in different hospitals in Lucena and Metro Manila.