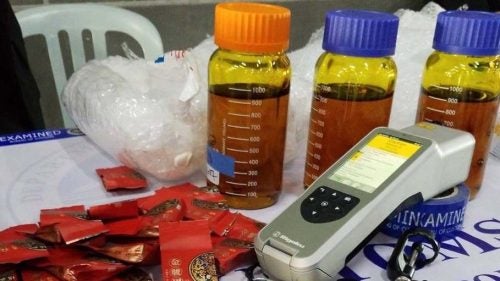 From the Bureau of Customs

MANILA, Philippines — Agents of the Bureau of Customs (BOC) discovered P216,000 worth of marijuana hash oil labeled as “drinking tea” from California, USA in an inspection in Pampanga, and arrested its claimant in Parañaque.

According to BOC in a statement, agents seized the illegal drugs after it was discovered during an x-ray scanning and physical examination, which were then confirmed by the Customs Anti-Illegal Drug Task Force (CAIDTF) through K9 sweeping on May 9 in the Port of Clark, Pampanga.

In it were three 1000-ML bottles of “Tetrahydrocannabinol” or marijuana hash oil labeled as drinking tea.

“Representative samples were then taken from the liquid substance and turned over to PDEA for chemical laboratory analysis. The analysis confirmed that the samples are indeed ‘positive’ for the presence of Tetrahydrocannabinol/Marijuana,” the BOC said.

District Collector Alexandra Lumontad then issued a Warrant of Seizure and Detention against the subject shipment for violation of Republic Act (R.A.) No. 10863, in relation to Section 4 of R.A. No. 9165, otherwise known as the “Comprehensive Dangerous Drugs Act of 2002.”

Combined elements of the BOC and the Philippine Drug Enforcement Agency (PDEA) then conducted a controlled delivery operation in Paranaque City, resulting in the arrest of the unidentified claimant.