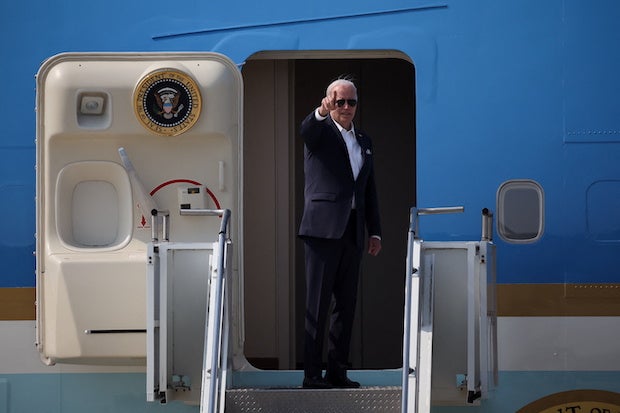 US President Joe Biden gestures as he departs for Japan at Osan Air Base in Pyeongtaek, South Korea, May 22, 2022. (REUTERS/Kim Hong-Ji/Pool)

ABOARD AIR FORCE ONE — The United States is looking to deepen its economic partnership with Taiwan even if though it is excluded from President Joe Biden’s new Asian economic initiative, a top official said.

“But we are looking to deepen our economic partnership with Taiwan, including on high-technology issues, including on semiconductors and supply chains.”

Self-governing Taiwan, which is claimed by China, had expressed an interest in joining the talks.

During his first trip to Japan since taking office, Biden will participate in a summit of the “Quad” grouping of countries, meeting with leaders of Japan, India, and Australia. Issues of regional security, including China’s steps toward Taiwan, are expected to figure into the discussions.

“We do not want to see unilateral changes to the status quo and we certainly don’t want to see military aggression. And we do want that message coming not just from us, but from a range of allies and partners, both in the region and beyond,” Sullivan told reporters aboard Air Force One.

Taiwan seeks Indo-Pacific Economic Framework membership with the US.

US calls for Taiwan’s inclusion at upcoming WHO assembly