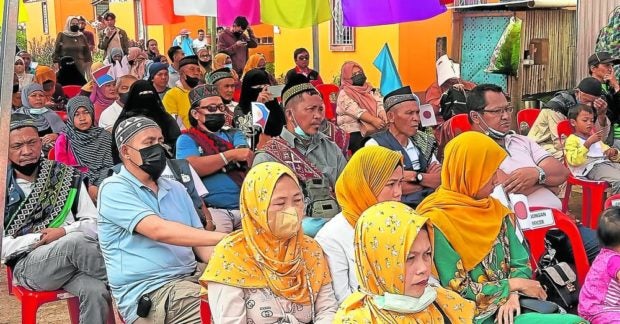 HOUSE OWNERS | Maranao beneficiaries of the permanent shelter project of the United Nations Human Settlements Programme in Marawi City attend a program on May 19 to wrap up the agency’s Rebuilding Marawi Project. (Photo by DIVINA M. SUSON / Inquirer Mindanao)

MARAWI CITY—Five years after the siege of this city, some displaced families have ended their quest for home inside the new structures built by the United Nations Human Settlements Programme (UN Habitat) in at least five areas here.

Among them, Anisah Bariga, 38, mother of nine children, called the UN Habitat’s shelter unit “our own house,” as her family moved in at Hadiya Village of Barangay Dulay West in February last year, leaving behind the house of a relative some 4 kilometers away, where they last took refuge.

But as the Maranaos remember the fifth year since the siege today, May 23, they look forward to the government’s promised compensation to rebuild their disrupted lives.

Abduljalil Madid, homeowners association president of Hadiya Village, said even if they now had permanent shelter and a livelihood, they still wanted to get the assurance that they would receive what was promised to them under the Compensation Law.

“We hope that the next president will continue to support us the way that President Duterte did. We hope that they will give us the compensation that has not yet been given to us,” Madid said in Filipino.

But more than 2,000 of those who still live in transitory shelters are also pining for the compensation they will get from the Marawi Compensation Law, Gandamra said.

“Many of them are waiting for the compensation that they will use in rebuilding their houses. Many of them have already approved building permits and there are still many others who are waiting,” Gandamra said.

Social Housing Finance Corp. (SHFC) and the National Housing Authority (NHA) earlier bought the land in five areas in the city, where UN Habitat, using the $10 million (about P500 million) donated by the Japanese government for the Marawi Rebuilding Project, built houses for families who could no longer go back to the fighting’s ground zero, or the so-called most affected area (MAA).

Among the 109 families in Hadiya Village, Bariga regarded their new 42-square-meter house on a 100-sq-m lot better than their destroyed home in the MAA.

Bariga, who is raising nine children, from 17 years old to 5 months, said their income from selling “dodol,” a Maranao delicacy, had also improved since leaving their evacuation at a school in Saguiaran town in Lanao del Sur province, where she and her husband stayed with their then six children for six months, and later the homes of relatives who accommodated their growing family.

Bariga, like most residents from the MAA, knows they could never return to their old houses. The area was among those declared by the government either as a “no-build zone” or “danger zone,” because these were either within the reclamation area or within the easement of Lake Lanao and the riverbanks.

As UN Habitat prepared to wrap up their project here, some displaced villagers still feared their new homes might be taken away from them again.

Taib Gaurak was worried he would lose his new house after he learned that the government only paid 25 percent of the 2.8-hectare land area they occupied in Barangay Dulay West.

“They are saying that this is a permanent shelter but how long do we have to wait for the full payment of the lot so that we will not be evicted again? It’s important for us that the lot would be fully paid so that no one could send us away again,” Gaurak said.

Felmar Gilbang, project manager of SHFC, however, assured residents they would not be evicted, pointing out that the heirs of the original landowner had issued a conditional deed of sale to SHFC after receiving the 20 percent of the price of the land.

“There were already certificates of award given to the homeowners,” Gilbang said.

On May 30, UN Habitat will wrap up its Marawi Resettlement Site projects after building 923 houses and with 77 to be completed by June this year. Of these, 538 were already turned over to families affected by the 2017 siege.

“The planning of the construction of these houses were participated in by the beneficiaries so that the house designs are culturally sensitive,” said Christopher Rollo, country program manager of UN Habitat Philippines.