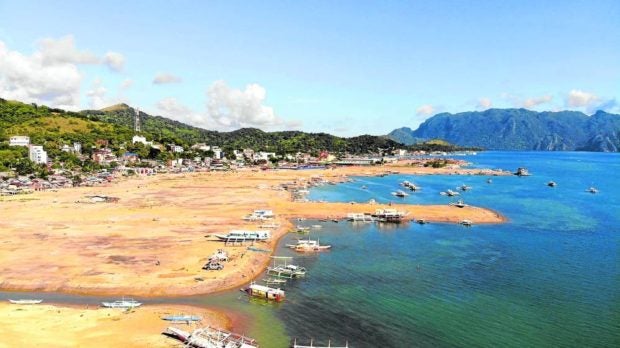 ALTERED LANDSCAPE | This now halted reclamation project in the tourist town of Coron in northern Palawan has been the subject of protests by residents and environmentalists because of the harm it has done to the marine biodiversity of the island famous for its pristine waters, beautiful beaches, and coral reefs. (Photo courtesy of BOB MAGALLANES)

PUERTO PRINCESA CITY, Palawan —There is now very little chance that the halted 51-hectare reclamation project in the tourist town of Coron in Palawan province can still resume after the Environmental Management Bureau (EMB) of the Department of Environment and Natural Resources (DENR) canceled the environmental compliance certificate (ECC) of the controversial project.

Joe Amil Salino, regional director of the DENR-EMB in Mimaropa (Mindoro, Marinduque, Romblon and Palawan), directed the provincial government of Palawan, the proponent of the Coron Bay Development Project (CBDP), to immediately suspend all of its reclamation activities in the town.

A P50,000 fine was also slapped by the EMB on the project’s proponents for their failure to comply with the required compliance monitoring report, according to the order dated May 12, a copy of which was obtained by the Inquirer on Saturday.

The project was granted an ECC in July 2007 for a 3-ha coastal reclamation in Coron. Two years later, in October 2009, another ECC was issued allowing an additional reclamation of 48 ha.

But the DENR-EMB said the CBDP did not only fail to submit a status report on its ongoing reclamation but also violated guidelines set on its ECC after a joint inspection of the DENR-EMB and the Philippine Reclamation Authority in March revealed the project only constructed a temporary drainage with no filtration system, allowing solid waste to drain to the sea.

The project, which has changed the coastal landscape of three adjoining villages of Coron, proceeded amid protests by environmentalists and residents concerned about its negative impact on the marine ecosystem of Coron, a known diving spot that has been drawing local and foreign tourists to the town.

The project was subsequently halted by President Duterte on March 22 after he was informed of the complaints raised by Sagip Coron Palawan (SCP), a civic movement that has vigorously opposed the project.

Marion Raagas, one of the convenors of SCP, welcomed the cancellation of the project’s ECC but stressed it was merely a start of the “journey toward full rehabilitation” of Coron’s damaged marine environment.

“The cancellation of the ECC is a major breakthrough in Sagip Coron’s efforts to resolve the illegal reclamation and quarrying activities in Coron. However, we are also cognizant that this is just the start of our journey toward full rehabilitation of Coron Bay and bring back the livelihood of its people,” Raagas said.

The project has not only threatened to wipe out the island’s biodiversity but has also affected the sources of income fishers and farmers after hills on the island were decimated and its soil used to fill up the reclamation site.

Palace takes over all reclamation projects in the country