Palace takes over all reclamation projects in the country 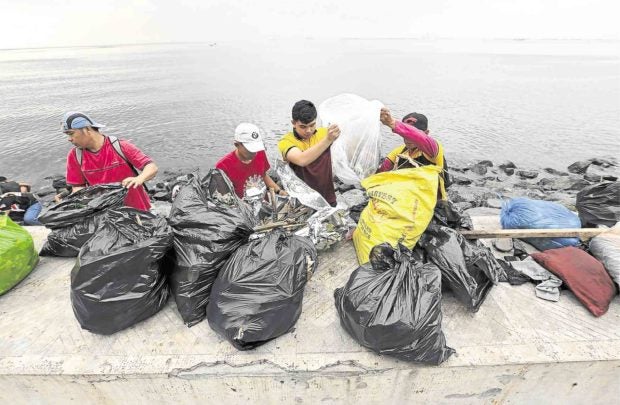 CLEANUP A fishermen’s group says the transfer of the Philippine Reclamation Authority to the Office of the President raises questions about the rehabilitation of Manila Bay, where 43 reclamation projects are planned or under way. -GRIG C. MONTEGRANDE

The Office of the President (OP) now has direct control and supervision over the Philippine Reclamation Authority (PRA), which has jurisdiction over 43 reclamation projects in Manila Bay alone.

One reclamation project has been awarded to Dennis Uy, a businessman from Davao City who has close ties to President Rodrigo Duterte.

The President has issued Executive Order (EO) No. 74 delegating the power of the President to approve reclamation projects to the PRA Governing Board.

“Such delegation, however, shall not be construed as diminishing the President’s authority to modify, amend, or nullify the action of the PRA Governing Board,” read the executive order, which Malacañang released on Monday.

It was signed by Executive Secretary Salvador Medialdea and took effect immediately.

EO 74 repealed directives that placed the PRA under the Department of Environment and Natural Resources (DENR).

Also repealed was the power of the National Economic and Development Authority (Neda) to approve reclamation projects.

The directive came amid the ongoing Manila Bay cleanup and reclamation projects in the area, which environmental groups oppose in an effort to protect Manila Bay’s natural environment.

Pamalakaya, a group of fishermen, has slammed the transfer of the PRA from the DENR to the OP, saying the move raises doubts about the real score in the government campaign to rehabilitate Manila Bay.

In a statement on Monday, Pamalakaya national chair Fernando Hicap said that while the group supported the rehabilitation of the heavily polluted bay, reclamation projects, which would also displace coastal communities, should not push through.

“This newly signed executive order will hasten not only the approval of reclamation projects in Manila Bay and throughout the archipelago, but as well as the destruction of marine environment and displacement of fishing communities,” he said.

Pamalakaya said the Las Piñas-Parañaque Critical Habitat and Ecotourism Area, the first critical habitat to be declared in the country, would be adversely affected by the proposed projects.

Pamalakaya records show that the 43 reclamation projects in Manila Bay will cover more than 32,000 ha of the 194,400-ha bay, which has a 190-kilometer coastline that runs through Cavite province, Parañaque, Pasay, Manila, Malabon, Navotas, and Bulacan, Pampanga and Bataan provinces.

Malacañang said the President, in issuing the directive, wanted to streamline the services of agencies under the executive branch.

At a press briefing, presidential spokesperson Salvador Panelo said Mr. Duterte wanted to be more hands-on with the approval of reclamation projects, even if the President was chair of the Neda, which used to have the power to approve reclamation projects.

The President issued the executive order, given the “need to rationalize the approval process for reclamation projects toward an economically and environmentally sustainable resource development.”

The directive stressed the government goal “to increase competitiveness, promote ease of doing business, and rationalize and streamline functions of agencies to facilitate efficient delivery of government services.”

The directive provides that the PRA seek the opinions of three agencies on any proposed reclamation project.

The PRA should get Neda’s opinion whether a project is consistent with national and regional development planning and programming, and government national priorities.

It should also consult the DENR on a project’s environmental sustainability and compliance with environmental laws, and the Department of Finance (DOF) on the project’s economic and fiscal viability.

The directive covers reclamation projects, including those initiated by local governments and other government entities allowed under existing laws to reclaim land.

Reclamation projects must undergo competitive public bidding and will not be approved without the required area clearance and environmental compliance certificate from the DENR, according to the order.

Among the reclamation projects in Manila Bay are:

Other reclamation projects in other parts of the country include:

Read Next
Pope and top Muslim cleric in joint call for freedom of belief
EDITORS' PICK
Cebu City closes its borders
BREAKING: 1,075 people in PH has coronavirus disease – DOH
Style and music journeys with Claudia Barretto
DILG to stranded workers: ‘Stay where you are’ until Luzon-wide quarantine is over
UP-PGH wards for COVID-19 patients finished in 5 days
IATF: Food firms to operate with 50% of workforce during Luzon quarantine
MOST READ
Pacquiao to seek probe on leaked private letter from Barangay Dasmariñas
Processing and release of 2020 UPCAT results suspended due to ECQ
Tootsy Angara bares neighbor wanted them out of village
593 health volunteers sign up to fight COVID-19, says DOH
Don't miss out on the latest news and information.