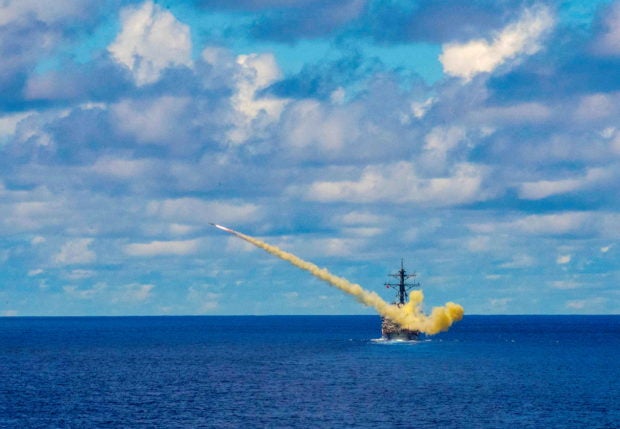 WASHINGTON — The White House is working to put advanced anti-ship missiles in the hands of Ukrainian fighters to help defeat Russia’s naval blockade, officials said, amid concerns more powerful weapons that could sink Russian warships would intensify the conflict.

Ukraine has made no secret it wants more advanced U.S. capabilities beyond its current inventory of artillery, Javelin and Stinger missiles, and other arms. Kyiv’s list, for example, includes missiles that could push the Russian navy away from its Black Sea ports, allowing the restart of shipments of grain and other agricultural products worldwide.

Current and former U.S. officials and congressional sources have cited roadblocks to sending longer range, more powerful weapons to Ukraine that include lengthy training requirements, difficulties maintaining equipment, or concerns U.S. weaponry could be captured by Russian forces, in addition to the fear of escalation.

But three U.S. officials and two congressional sources said two types of powerful anti-ship missiles, the Harpoon made by Boeing and the Naval Strike Missile made by Kongsberg and Raytheon Technologies were in active consideration for either direct shipment to Ukraine, or through a transfer from a European ally that has the missiles.

In April, Ukraine’s President Volodymyr Zelensky appealed to Portugal to provide the Ukrainian military with Harpoons, which have a range of up to almost 300 km.

But there are several issues keeping Ukraine from receiving the missiles. For one, there is limited availability of platforms to launch Harpoons from shore — a technically challenging solution according to several officials — as it is mostly a sea-based missile.

Two U.S. officials said the United States was working on potential solutions that included pulling a launcher off of a U.S. ship. Both missiles cost about $1.5 million per round, according to experts and industry executives.

About 20 Russian Navy vessels, including submarines, are in the Black Sea operational zone, the British defense ministry has said.

Bryan Clark, a naval expert at the Hudson Institute, said 12 to 24 anti-ship missiles like the Harpoon with ranges over 100 km would be enough to threaten Russian ships and could convince Moscow to lift the blockade. “If Putin persists, Ukraine could take out the largest Russian ships, since they have nowhere to hide in the Black Sea,” Clark said.

Russia has already suffered losses at sea, notably the sinking of the cruiser Moskva, the flagship of its Black Sea fleet.

A handful of countries would be willing to send Harpoons to Ukraine, the U.S. officials and the congressional sources said. But no one wants to be the first or only nation to do so, fearing reprisals from Russia if a ship is sunk with a Harpoon from their stockpile, the third U.S official said.

That U.S. official said one country is considering being the first to supply the missile to Ukraine. Once that “well stocked” nation commits to sending Harpoons, others might follow, the official said.

The Naval Strike Missile (NSM) can be launched from the Ukrainian coast and has a range of 250 km. It also takes less than 14 days training to operate.

The sources said NSMs were viewed as less logistically difficult than Harpoons, because NATO allies could loan mobile ground launchers which are available, and warheads from Norway.

The first two U.S. officials and the congressional sources said the United States was trying to work out a way for Ukraine to obtain NSM and launchers from European allies.

The congressional sources said another option would be for Norway to donate NSMs to Ukraine, an idea supported by Norwegian members of parliament. The Norwegian Ministry of Defense declined to comment on what additional contributions of arms and defense equipment it may consider offering to Ukraine.

All weapons requests that have U.S. content such as Harpoons and NSMs would have to be approved by the U.S. State Department, which takes guidance from the White House.

Another weapon high on Ukraine’s shopping list are Multiple Rocket Launch Systems (MLRS) such as the M270 made by Lockheed Martin which can strike a target 70 or more kilometers away, a three-fold increase over many of their current howitzer rounds.

In recent weeks, the Biden administration decided instead to send M777 towed howitzers which could be deployed faster and shipped in larger quantities, the two U.S. officials said.

The two U.S. officials said the M270 or similar system like the M142 HIMARS would be considered for shipment to Ukraine once Congress passed a $40 billion supplemental funding bill that would authorize an additional $11 billion worth of Presidential Drawdown Authority. That lets the president authorize the transfer of excess weapons from U.S. stocks without congressional approval in response to an emergency.