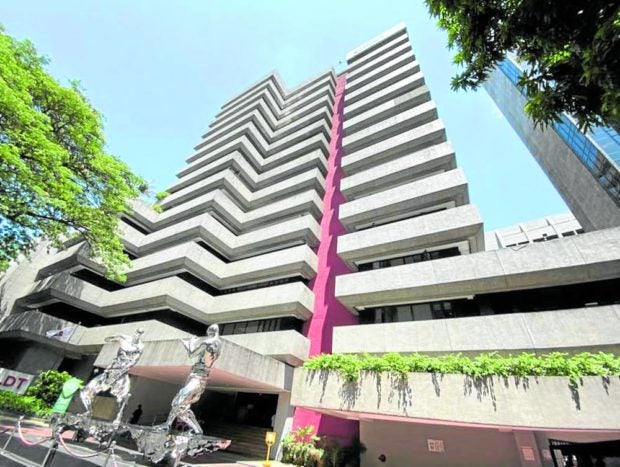 MANILA, Philippines — Telecommunications giant PLDT Inc. has filed a petition to remove the “important cultural property” (ICP) label on its headquarters — the Ramon Cojuangco Building (RCB) which was designed by National Artist for Architecture Leandro V. Locsin in 1974 and was completed in 1982.

In a notice to the public dated May 17, as the country observes National Heritage Month, the National Commission for Culture and the Arts (NCCA) said PLDT had explained that RCB “does not demonstrate exceptional cultural, artistic, and historical significance” for the structure to be considered an ICP.

The company controlled by businessman Manuel V. Pangilinan added that the 15-story building at the corner of Dela Rosa Street and Makati Avenue in Makati City was a “generic, nondescript and purged of any references to local culture, tradition, climate or identity of the place” and did not represent the iconic works of Locsin.

In its 15-page petition submitted to the NCCA on April 4, PLDT said it was planning to redevelop and transform RCB into a “modern, ecologically sustainable and open campus-type headquarters” to strengthen its business units’ efficiency and keep up with the changing needs of its customers.

But before doing so, the company is required to get the approval of the NCCA to lift the building’s ICP status under the National Cultural Heritage Act of 2009, or Republic Act No. 10066, which was signed by then President Gloria Macapagal-Arroyo on March 26, 2010, to protect the country’s historical sites.

Under the law, the government and relevant cultural and historical agencies are mandated to “conserve, develop, promote and popularize the nation’s historical and cultural heritage and resources, as well as artistic creations.”

It defines an ICP as a cultural property that has exceptional cultural, artistic and historical significance to the country as determined by the National Museum or the National Historical Commission of the Philippines and provides that works by a “Manlilikha ng Bayan” or national artist must be considered as ICP unless declared otherwise by the NCCA.

“A declaration or a lifting of cultural property as National Cultural Treasure or (ICP) shall commence upon the filing of a verified petition by the owner, stakeholder or any interested person with the Commission,” read the Section 11 of RA 10066.

In line to the PLDT petition, the NCCA said “any person adversely affected by said petition may file their written support or opposition with this office or through [email protected] not later than June 7.”

Among the famous works of Locsin are the Cultural Center of the Philippines’ Theater of Performing Arts, Hyatt Regency Hotel, Ninoy Aquino International Airport Terminal 1 and the Chapel of the Holy Sacrifice at the University of the Philippines in Diliman.

According to the NCCA report that cited the 2009 study of architect Caryn Paredes Santillan, Locsin’s works may be characterized by their bipolarity in architectural forms and spaces, including the floating effect, grounded flight, enclosed openness and alternation of opposite spatial characters.

His designs, based on Jean-Claude Girard’s “Leandro Valencia Locsin, Filipino Architect,” also feature an appreciation of modern styles, owing to the international influences and adapting them to the context and culture of the Philippines.

RCB has three basements, a roof deck and a podium garden. Floating horizontal masses of concrete finished with exposed aggregates envelop the exterior of the building.

“A characteristic seen in LV Locsin’s mid to high-rise buildings are the attempts to imply that the building rises from the ground through the emphasis on the vertical or articulation of platforms,” the report said, referring to Girard’s analysis.

Following the procedures on the removal of RCB’s presumption as ICP, the agency conducted an on-site evaluation of the structure on May 5.

After the ocular inspection, it reported that RCB reflected the national artist’s language and floating effect characteristics “as seen in multiple floating planes of its exterior.”

“While the original Beton brut design is voided by the introduction of paint, nonetheless, this does not posit that the structure is not reflective or has diminished LV Locsin’s style,” the NCCA said.

It noted that specific interventions in the structure were “uncharacteristic” of Locsin and that there were “distinguishable changes” in common areas like elevator lobbies.

“In summation, the RCB has gone through several interventions over time in its exterior faces and interior spaces, nevertheless, these are reversible and can be returned to the original finishing,” the agency added.