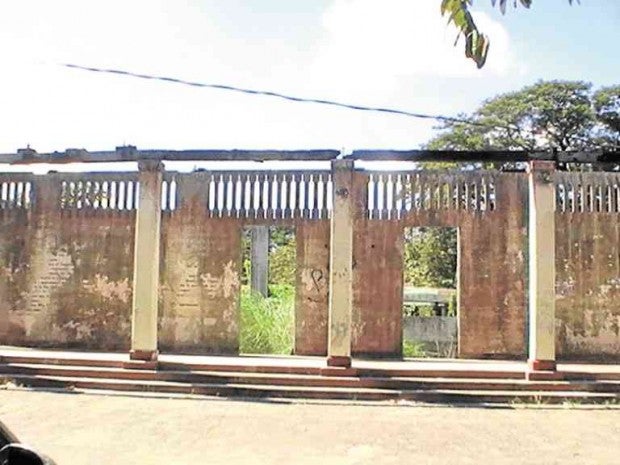 The shell of a Gabaldon building that burned in 2010 stands as a reminder of a vanishing legacy inside the Bayambang Central School in Pangasinan province. CONTRIBUTED PHOTO

BAYAMBANG, Pangasinan—The National Historical Commission of the Philippines (NHCP) has stopped the local government from demolishing or altering the remaining Gabaldon building on a school campus, which has been given up in a controversial land swap deal.

In a Jan. 6 letter to Mayor Ricardo Camacho, NHCP Chair Maria Serena Diokno said the Gabaldon building of the Bayambang Central School is a heritage structure and can qualify as an important cultural landmark. The building was built in the early 1920s.

The building is on the 3.2-hectare campus that was swapped with a 2.2-hectare lot owned by a businessman in Barangay Bical here. The proposed new campus has a building which can hold 60 classrooms.

Parents and teachers opposed the swap but the Department of Education was ordered by a local court in 2013 to transfer the pupils to the new campus.

The NHCP, however, urged the Bayambang government to spare the Gabaldon building at the old campus.

“Since the NHCP collaborates with the Department of Education to preserve Gabaldon buildings throughout the country, we enjoin you to refrain from demolishing or altering the Gabaldon building in keeping with the law,” Diokno told Camacho.

Gabaldon buildings are schoolhouses built in the provinces during the first decades of the American colonial rule, as mandated by Act No. 1801 authored by Nueva Ecija Assemblyman Isauro Gabaldon. These buildings were designed by American architect William Parsons and were named after Gabaldon.

Diokno intervened at the request of the school’s Parents-Teachers Association (PTA).

“Our alma mater is a priceless memorial and monument that should not be destroyed or demolished but be preserved and protected,” said PTA president, Filipina Alcantara, and Nelson Borillo, former PTA vice president, in a 2013 letter to the NHCP.

Last year, the House of Representatives passed on third reading a bill seeking to preserve Gabaldon and other heritage school buildings which “have withstood the elements and until the present are still being used by public schools throughout the country.”

The bill will require the government to “rehabilitate and repair [Gabaldon buildings] nationwide to preserve their historical significance.”