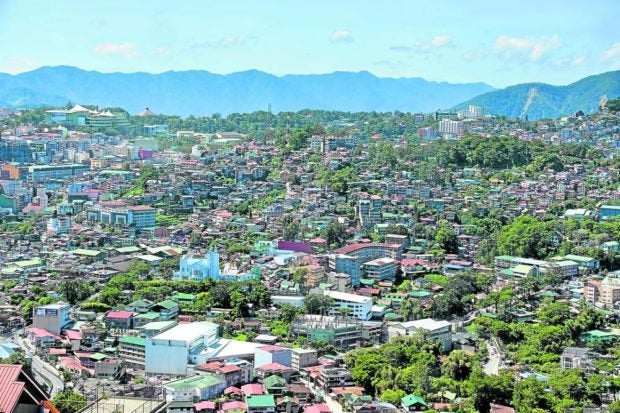 CHANGING SKYLINE Baguio City has to contend with problems related to overdevelopment as businesses continue to expand in the summer capital. The tourism-dependent city has started to recover as travel restrictions due to the pandemic have been eased. (Photo by NEIL CLARK ONGCHANGCO)

BAGUIO CITY, Benguet, Philippines — Businesses in this city and the rest of the Cordillera region performed well last year, as reflected by the P5.9-billion collection by the Bureau of Internal Revenue (BIR).

The 2021 revenues exceeded the regional collection target of P5.5 billion and confirmed the Cordillera’s economic rebound last year with a 7.5-percent gross regional domestic product (GRDP), said Douglas Rufino, director of the BIR in the Cordillera, at a Wednesday briefing.

The region had already suffered a 10.2 contraction (or a negative GRDP) in 2020 when the COVID-19 pandemic broke out. GRDP measures the value of goods and services generated in the region.

Around 70 percent of these collections were from Baguio, where the BIR collected P2.935 billion in taxes in excess of the P2.85-billion target, he added.

“That’s why we say that if Baguio gets a mild cold, the rest of the Cordillera gets diarrhea,” Rufino said in jest.

Many enterprises in Baguio and the provinces of Benguet, Ifugao, Abra, Apayao, Kalinga, and Mountain Province had shut down and were unable to reopen when public health restrictions on local businesses were eased, he said.

Except for essential manufacturers, virtually all of the country’s businesses were shuttered during the 2020 Luzon-wide lockdown and the subsequent quarantines. 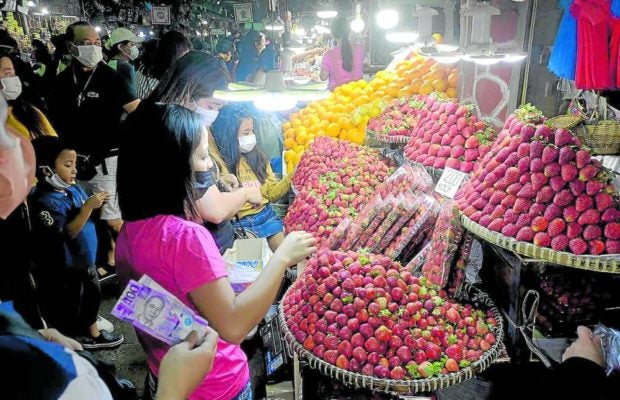 TOURIST MONEY | The surge of tourists, seen here crowding the Baguio City public market on April 17, 2022, contributed to the high tax collections recorded from January to April this year, and the taxes generated throughout the Cordillera in 2021. (Photo by EV ESPIRITU / Inquirer Northern Luzon)

But this downturn has evened out because new retail and food businesses were put up to fill the vacuum, Rufino said. Commercial buildings and condominiums, which were still being constructed in 2020 or whose operations were delayed, have now opened, he said.

Lawyer Wilfredo Reyes, the BIR Baguio revenue officer, said collections have also been high from January to April this year because of the surge in tourists traveling to the summer capital.

With a 2022 collection target of P7.1 billion, the BIR generated P2.39 billion in taxes for the first four months of the year, the officials said.

Rufino said the collections matched the 2021 GRDP of the Cordillera, which ranked third among the country’s fastest-growing regional economies last year.

Construction, manufacturing, wholesale retail, and even motorcycle and vehicle repair shops, were some of the key drivers of the regional economy’s improved performance, said Villafe Alibuyog, the Philippine Statistics Authority (PSA) director in the Cordillera, at a press briefing on April 28.

The loan portfolio of Cordillera banks also increased to P20.2 billion in 2021 from P18.7 billion in 2020, according to lawyer Noel Neil Malimban, north Luzon director of the Bangko Sentral ng Pilipinas, who attended the briefing.

According to Nathaniel Lacambra, director of the Department of Labor and Employment in the Cordillera, employment in the region appears to be returning to prepandemic levels after a sharp drop in unemployment from 14 percent in 2020 to 5.43 percent last year.

Agriculture again contracted by 1.7 percent, the only sector in the region that registered a poor performance last year, according to the PSA.

The region’s hog farmers also suffered a blow with the outbreak of the African swine fever that affected food production, he said.

Cameron Odsey, regional director of the Department of Agriculture, said the agency was helping introduce downstream industries, like vegetable processing, to improve farm income, and had been shelling out aid, such as fuel subsidies, to sustain production.