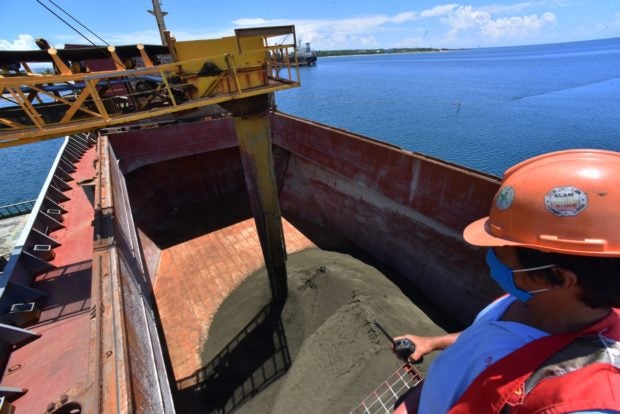 READY FOR SHIPPING | Benguet mines are considered essential industries and allowed to continue operating at the start of the COVID-19 pandemic, but they enforce strict health protocols. In this 2020 photo shows workers of Philex Mining Corp. ferry are transporting extracted minerals from its Padcal project in Benguet to Poro Point in La Union province so these can be shipped to overseas buyers. (File photo by EV ESPIRITU / Inquirer Northern Luzon)

BAGUIO CITY, Benguet, Philippines — Some of the country’s oldest mines in Benguet province are prepared to double down and increase production to help speed up the country’s economic recovery.

These pioneer mines, which began operating during the American colonial period, benefit from high world metals prices, which means more company revenues “that translate to more taxes for the government,” said lawyer Eduardo Aratas, who heads the legal and administrative department at the Padcal project of Philex Mining Corp.

President Rodrigo Duterte last year described mining as key to rebuilding the economy after he lifted industry restrictions imposed in 2012 by the late President Benigno Aquino III through Executive Order No. 79, which reformed all regulatory and taxation rules governing the mining industry and established zones where mining is prohibited.

The executive order was reinforced in 2016 by the late Environment Secretary Gina Lopez who suspended mining firms for violating environmental laws.

While most businesses shut down during the Luzon lockdown in 2020, Philex continued to operate after the national pandemic task force classified mining as an essential sector being an export-oriented industry, Aratas said.

Most mines struggled with low metal prices before the pandemic, he said.

“But 2021 was one of our best operating years [in Padcal] … when prices for metals rose [and continue to remain high] until the present. We were able to take advantage of that development during the pandemic,” he added.

Progress has also been made in the pocket mining sector despite the pandemic.

The number of Minahang Bayan (people’s mine) approved for the Cordillera has risen to 11, six of which received clearance to operate last year and in January this year, said Alfredo Genetiano, mine management division chief of the Mines and Geosciences Bureau (MGB) in the region.

Small-scale mining associations are completing their permits so they could start working in these people’s mining zones in Benguet, Apayao, Abra, Kalinga and Mountain Province, Genetiano said.

Apayao has two more areas that need to be declared Minahang Bayan by the Provincial Mining Regulatory Board after being cleared by Environment Secretary Roy Cimatu, who resigned recently, Genetiano said.

The Cordillera economy contracted by 9.9 percent in 2020 as a result of the business shutdowns, although that year ended for the mineral sector with increased production worth P10.24 billion from P9.7 billion generated in 2019, according to MGB records.