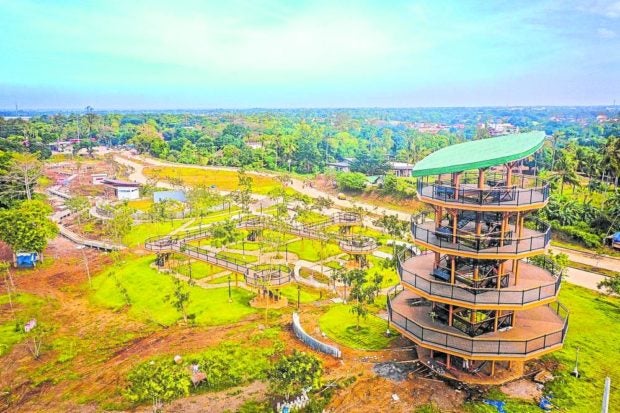 GREEN SPACE | Puerto Princesa City officials are banking on this green space, where “balayong” trees (Palawan cherry) are planted, to give tourists an alternative destination in the Palawan capital. When trees here mature, this view deck in the shape of a balayong petal will give tourists a good vantage of cherry blossoms, as if experiencing the crowd-drawing sakura of Japan. (Photo courtesy of JAN CHARLEE LIGAD)

PUERTO PRINCESA CITY, Palawan, Philippines — With tourism losses breaching P5 billion since the COVID-19 pandemic was declared in 2020, this capital city of Palawan province is clearing the path to recovery by easing travel restrictions and opening more destinations to attract visitors.

On Feb. 17, the city government lifted some of its restrictions, including the four-day cap for leisure visits. Airline capacity limits have also been lifted while testing will still be required for unvaccinated or partially vaccinated travelers two days before their trip, said lawyer Norman Yap, spokesperson for the city’s pandemic task force, in a press briefing on Feb. 16.

Puerto Princesa is expecting that its COVID-19 cases will be less than 100 by March and this will be the right time to relax travel guidelines and public health protocols, said Dr. Dean Palanca, head of the Incident Management Team in Puerto Princesa.

The city government intends to make a park planted with “balayong” (Palawan cherry), a top tourism attraction for the city tour and as an alternative to the usual island hopping packages.

Inaugurated in July 2021 but was opened to the public only in December 2021 due to health and travel restrictions, the Balayong Park was developed as a green space where various outdoor activities could be held.

The P250-million park, whose concept was first introduced in 2016, includes a tower view deck, waterpark, recreational and children’s parks, food complex, and artists’ pavilion, among other facilities.

The 7-hectare park had been planted with over 1,200 balayong trees. At least 400 of these were young trees that were saved from the city’s road expansion projects and had been earth-balled and transplanted in the park, according to the City Agriculture Office.

Balayong, which takes five years to reach full maturity, is a small to medium tree that can grow up to 15 and 25 meters tall. It bears white and pink flowers blooming from March to April. The tree sheds its leaves in December.

Locals believe that balayong is native to Palawan, although some accounts say the tree came from species originating from other Southeast Asian countries.

An estimated 24,000 tourism workers in Puerto Princesa City and the rest of Palawan had been displaced when the country was placed under lockdown starting March 2020 and with restrictions on leisure travel continuing until October 2021.

In 2020, Puerto Princesa’s tourism industry lost P5.45 billion, an 80-percent drop in revenue compared to 2019, according to the Department of Tourism. Tourist arrivals further dipped to 71,889 in 2020 from 1,170,083 in 2019 as lockdowns were declared and tourist destinations were forced to close due to the pandemic.