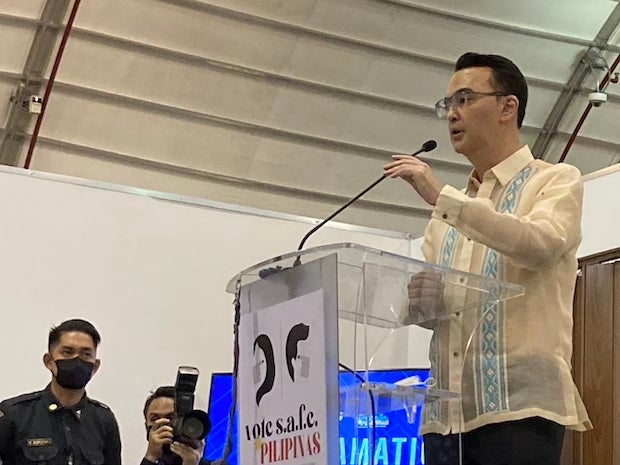 Senator-elect Alan Peter Cayetano speaks after his proclamation on May 19, 2022, at the PICC in Pasay. (Photo by DANIZA FERNANDEZ / INQUIRER.net)

MANILA, Philippines —Three senators are vying for the Senate presidency, Senator-elect Alan Peter Cayetano said on Wednesday shortly after being proclaimed with 11 other winning senatorial candidates in the so-called Magic 12.

Cayetano did not identify who the senators were.

“I think three are running for Senate president,” he said, speaking in a mix of Filipino and English. “As far as I know — I counted — and if I‘m correct, none of them have the 13 or more [votes needed to be elected] right now.”

In the 24-member Senate, the Senate president is chosen by a majority of votes of all members.

Is Cayetano one of the three vying for the position?

“I have the same answer for them: I’d like to remain independent. So, I’m actually not engaging,” Cayetano said.

He gave a hint, however, saying: “I don’t think it’s up to me, but the three who I heard are running are a woman and two men.”

The Commission on Elections proclaimed the winning senators at the Philippine International Convention Center in Pasay City.

He will be in the Senate for the 19th Congress, joining his older sister, Sen. Pia Cayetano, who was elected in 2019.