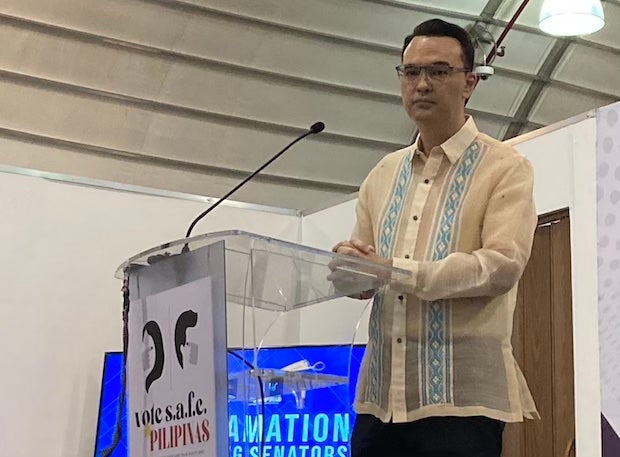 Senator-elect Alan Peter Cayetano speaks after his proclamation on May 19, 2022, at the PICC in Pasay. (Photo by DANIZA FERNANDEZ / INQUIRER.net)

MANILA, Philippines — “So, the question is whether I’ll be part of the majority or minority. That’s not up to me. That’s up to the members of the Senate,” Senator-elect Alan Peter Cayetano said after being proclaimed on Wednesday with the 11 other winning senatorial candidates making up the so-called Magic 12.

The Commission on Elections made the proclamation of the winners in the May 2022 senatorial race at the Philippine International Convention Center in Pasay City.

Cayetano then explained his response to the reporters’ question.

He pointed out that the terms “minority” and “majority” and “administration” and “opposition” had different meanings in the Senate.

“If the members of the Senate — most of them — decide to have a principled independent Senate, then I could be part of the majority,” he said.

“If the Senate — most of them — feel like they will have a Senate that will be part of this administration in a way that they feel that they should not fiscalize, then I cannot be part of that. Same thing with the minority,” added the returning senator.

He will join in the Senate in the 19th Congress with his older sister, Sen. Pia Cayetano.