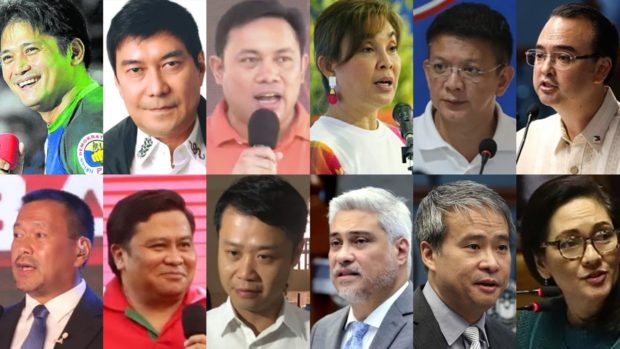 “Magic 12” in the May 2022 senatorial polls. INQUIRER graphics

MANILA, Philippines — Malacañang on Wednesday said there is a “sense of hope and optimism” with the newly proclaimed 12 senators as it called on the public to “move forward” after the 2022 elections.

“Our people have elected old and new faces in the Senate, and there is a sense of hope and optimism with the new set of lawmakers,” acting presidential spokesman Martin Andanar said in a statement.

“It is now time to move forward after a divisive election campaign and begin the daunting task of speeding up our economic recovery affected by the COVID-19 pandemic,” he added.

“Let us work closely together and pray for our nation’s success,” Andanar continued.

President Rodrigo Duterte, as well as Vice President Leni Robredo, have been invited to attend the proclamation of the 12 winning senators.

Read Next
Villanueva to defer choice of Senate leadership to Seatmates bloc
EDITORS' PICK
High inflation: Your P1 is now worth only 87 centavos
UK’s Boris Johnson will resign, BBC reports
Geek out at TOYCON 2022 powered by Smart Signature
House energy committee chair Arroyo bats for cheap electricity
High-risk pregnancy: Reducing your risk is in your hands
Unemployment rate up to 6% in May
MOST READ
Suspect in grisly killing of missing woman in Bulacan arrested
Hong Kong suspends flight bans as it eases COVID-19 rules
Kim Atienza’s daughter flaunts bikini body in response to critics of her ‘revealing photos’
Cop slain in Isabela ambush
Don't miss out on the latest news and information.