Young, poor and from minorities: the Russian troops killed in Ukraine 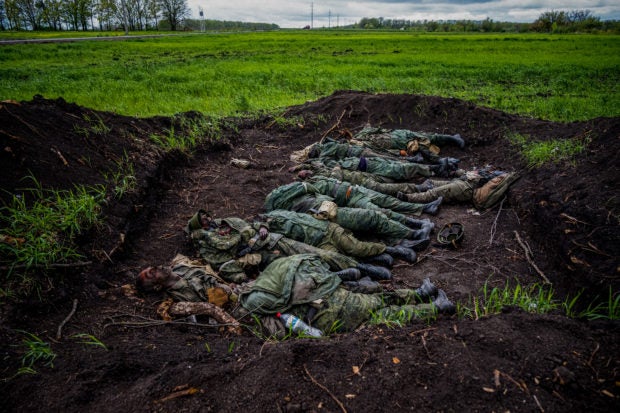 This picture taken on May 9, 2022 shows the bodies of 11 Russian soldiers found in the village of Vilkhivka, near the eastern city of Kharkiv, after the village was retaken by the Ukrainian army, amid the Russian invasion of Ukraine. AFP

PARIS — The bulk of the thousands of Russian soldiers killed in Moscow’s onslaught against Ukraine are very young, have poor backgrounds and many are from ethnic minority groups, observers say.

There has been close attention on the numbers of Russian generals and high-ranking officers killed since the invasion launched by President Vladimir Putin on February 24, which has proved far more costly than the Kremlin wished.

But with observers believing the Russian toll could now be exceeding the 15,000 Soviet soldiers killed during the 1979-1989 occupation of Afghanistan, the losses among Russian rank-and-file soldiers have been devastating.

Russia has been remarkably tight-lipped on the number of its soldiers killed, giving a toll of 498 soldiers killed on March 2 and updating this to 1,351 on March 25, with no more information since.

Ukraine puts the toll of Russian soldiers at 27,000 and while most Western sources find this high, they also give figures many times higher than the Russian estimates.

“Russia has now likely suffered losses of one third of the ground combat force it committed in February,” the British defence ministry said Sunday, indicating that some 50,000 Russian soldiers had been killed or wounded.

In a rare nod to the potential significance of the losses, though without going into any numbers, Putin paid tribute to those killed at Russia’s Victory Day commemorations on May 9.

“We bow in front of our comrades in arms who died courageously in a just fight, for Russia. The death of every soldier and officer is a cause of grief for us and an irreplaceable loss for loved ones,” he said, announcing a package of measures to help the families of those wounded or killed.

The Russian-language website Mediazona said it had been able to confirm the deaths of 2,099 Russian soldiers in action up to May 6 from open sources alone.

It said that the largest proportion of those killed where age was mentioned was among 21- to 23-year-olds, and 74 had not even reached the age of 20.

A regional breakdown showed most of the dead came from the south of Russia, including the mainly Muslim Northern Caucasus region, as well as central Siberia.

Only a handful of deaths were recorded of soldiers from Moscow and the second-largest city, Saint Petersburg, which are considerably more affluent than the rest of Russia.

The largest numbers of confirmed deaths (135) were of soldiers from the Muslim Northern Caucasus region of Dagestan followed by Buryatia, home to the Mongol Buryat ethnic group, in Siberia (98).

“The largest number of soldiers and officers within the ground troops comes from the small towns and villages of Russia. It is related to socio-economic and, consequently, educational stratification,” Pavel Luzin, a commentator for the Riddle Russia online news site, told AFP.

“The requirements for military service in the ground troops are relatively low, and the best and educated soldiers and future officers go to other branches of the Russian armed forces like air and space forces, strategic rocket forces and navy,” he added.

Local media and Telegram channels in Dagestan, which for years battled an Islamist insurgency and is one of Russia’s poorest regions, have been filled with images of grieving relatives receiving condolences from state officials.

In one example, Kamil Iziiev, head of the Buynaksky district of Dagestan, on May 6 posted a video on his Telegram channel showing him giving posthumous state awards to families of five inhabitants of Dagestan killed in the war, accepted by wives and mothers wearing the Muslim headscarf.

“You have to live on as mothers of children whose fathers heroically gave up their lives. Dear relatives, I ask you to remember that a person is alive so long as they are remembered. So let’s remember these guys,” he said.

The very first Russian soldier officially confirmed by Moscow to have been killed was Nurmagomed Gadzhimagomedov, a young Dagestani who state media said died while saving fellow troops. He was posthumously decorated by Putin with the Hero of Russia award on March 4.

His death prompted Putin to publicly pay tribute to the role played by non-Russian ethnic groups in Moscow’s assault, saying he was “proud of being part of this world, this powerful, strong and multinational people of Russia.”

The Soviet invasion of Afghanistan sparked a national trauma –- chronicled in Nobel prize-winning author Svetlana Alexievich’s harrowing oral history “Boys in Zinc,” named after the lining of the coffins in which the young soldiers came back –- and contributed to the collapse of the USSR.

The draconian censorship measures imposed by Moscow in the Ukraine conflict –- which mean that what the Kremlin terms a “special military operation” cannot even be called a war in Russia –- have kept dissent to a minimum, with few daring to express alarm over the losses.

A rare voice has been that of Natalia Poklonskaya, a former prosecutor in the Ukrainian peninsula of Crimea who became a Russian MP and Russian official after the annexation.

Taking issue with the use of the letter ‘Z’ by the Russian authorities as a propaganda image, she said it “symbolised a tragedy for both Russia and Ukraine. Why? Because Russian soldiers are being killed.”

Luzin said the lack of open signs of protest in provincial Russia and ethnic minority regions over the losses did not mean that there would be no reaction in the future.

“But their reaction will not be an open resistance but a hidden one — they will start to avoid conscription and contract military service,” he said.

Ukraine’s Zelensky on Azovstal: We hope to save ‘lives of our guys’

Russia says it shot down three Ukraine fighter jets, one near Snake Island