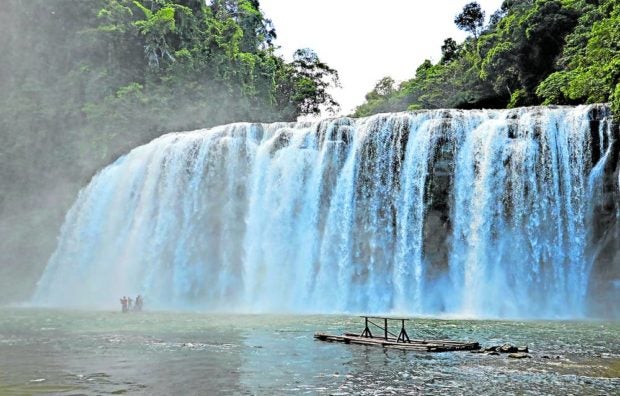 BUTUAN CITY, Agusan del Norte, Philippines — With COVID-19 restrictions easing up, tourism officials of Bislig City in Surigao del Sur province were anticipating an increase in the arrival of tourists drawn to the majestic Tinuy-an Falls.

Everlee Viola, head of Tinuy-an Falls Protected Landscape Project, said summer bookings had spiked and could be on the way to surpassing records set in 2019, before the pandemic struck in March 2020.

Located in Barangay Borboanan, the 99-meter-wide and 26-m-high Tinuy-an Falls is dubbed the “Little Niagara Falls of the Philippines” because its curtain of water that cascades from the four-tier drop resembles Niagara Falls along the borders of New York and Ontario, Canada.

The current arrivals in the ecotourism park come from Bukidnon, Cotabato and the Davao provinces, and the cities of Cagayan de Oro and General Santos.

Viola said that in April, the park earned close to P1 million, of which P366,500 were recorded during the Holy Week, from Maundy Thursday to Easter Sunday.

Emerging destinationsThe park earns mainly through entrance fees of P50 per visitor. It also collects rent for the use of cottages and life vests.Lorelei Teresa Lim, Bislig City tourism operations officer, said the increase in tourist arrivals drawn to Tinuy-an Falls also helped grow the demand for other local destinations.

Lim noted that from two, the number of beach resorts in the city has grown to 16. “We also saw the rising popularity of the destination known as Kawa-kawa, which features natural rock pools that look like rounded cooking pans with free-flowing water from the mountains,” Lim added.

She said guests who went to Tinuy-an also visited Kawa-kawa and other emerging destinations, boosting the recovery of the tourism industry and the local economy.

Tinuy-an Falls, together with its surrounding watershed area, is declared a protected landscape under Republic Act No. 11038 and is under the control and supervision of the Department of Environment and Natural Resources.

The ecotourism park is co-managed by the indigenous people’s community which receives 10 percent of the gross income. Another 10 percent goes to the barangay, 10 percent to the environmental protection fund, and the rest to the maintenance and salary and allowances of 40 workers.

In 2019, the park earned P9.6 million, up from P7.9 million a year earlier. But growth prospects dimmed with the pandemic. When it reopened in 2021, revenues reached only P3.4 million as it had to close again due to a surge in COVID-19 infections.