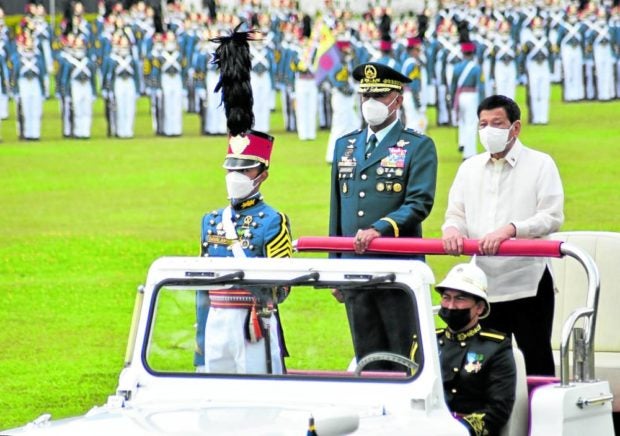 TROOPING THE LINE | President Rodrigo Duterte inspects the formation of Philippine Military Academy cadets on Sunday during the graduation of “Bagsik Diwa” Class of 2022. This is his last official task for the military school as the Commander in Chief of the Armed Forces of the Philippines. (Photo by EV ESPIRITU / Inquirer Northern Luzon)

BAGUIO CITY, Benguet, Philippines — The newly commissioned junior officers of Philippine Military Academy (PMA) “Bagsik Diwa” Class of 2022, who graduated on Sunday, will have multiple tasks as military leaders of a fast-changing world, President Rodrigo Duterte said in his last visit to the premier military school as commander in chief of the Armed Forces of the Philippines.

“The world is changing and it is changing fast. And so do attitudes, mores, and values. The man in uniform has not been spared from this phenomenon for he has undergone and will continue to undergo some degree of transformation,” Duterte told the 214 graduates of Bagsik Diwa, which is composed of 49 females and 165 males led by valedictorian Navy Ensign Krystlenn Ivany Quemado.

Duterte officially bade farewell to PMA, saying his “public life as commander in chief has come to an end.”

He added: “In contrast, your responsibility to uphold, protect, and secure people’s lives and properties officially starts today.”

Admitting that his administration “was constrained to adopt extreme legal measures to fight societal ills,” Duterte said the salvation of the country is now in the hands of the youth: “You, the Bagsik Diwa Class, belong to that generation.”

“It is sad to admit that after six years, these evils hound us still, though in lesser degrees of intensity,” the president said.

He said defeating corruption, red tape, illegal drugs and crimes was now in the “next generation of Filipino leaders and movers, where our salvation rests.”

The new graduates received their Bachelor of Science degree in National Security Management, with 105 of them joining the Army, 52 bound for the Air Force, and 57 serving in the Navy.

The president urged the new AFP officers to “remain rooted to the basic concept of soldiering, which is to defend, protect and advance freedom and democratic institutions.”

Bagsik Diwa Class, which stands for “Bagong Sibol sa Kinabukasan Didigma Hanggang sa Wakas,” has been prepared “for all possibilities and all eventualities,” the President said, and would serve the country as both “warrior and peacemaker, arms bearer and pencil pusher, and an offensive machine and fearless defender.”

This was the first in-person commencement exercise to be held inside Fort del Pilar here, which was locked down as soon as the coronavirus pandemic broke out in 2020. PMA reopened its gates to the public in March after Baguio was granted the most relaxed alert level 1 status.

The graduates’ parents, friends, and relatives attended the ceremony, joined by the top commanders of the AFP and the Philippine National Police; and reelected officials that included Baguio Mayor Benjamin Magalong, a member of PMA “Sandigan” Class of 1982, and Benguet Gov. Melchor Diclas.