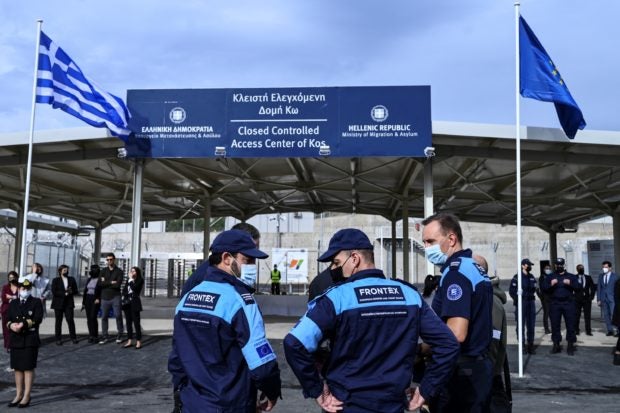 In this file photo taken on November 27, 2021, members of European Border and Coast Guard Agency Frontex stand outside the new closed migrant camp in the Greek island of Kos. . AFP

GENEVA — Switzerland votes on Sunday on whether streaming services should cough up money to boost Swiss film-making — and whether everyone should automatically become an organ donor unless they say otherwise.

Under the wealthy Alpine nation’s direct democracy system, voters are called to the polls four times a year to decide on specific topics, according to popular demand.

Besides streaming services and organ donation, the Swiss are voting on whether to join in the planned expansion of the European border agency Frontex, providing more money and staff to protect the continent’s Schengen open-borders zone.

The polls close at midday (1000 GMT), with most ballots having already been sent in by post over the past four weeks.

Vote projections should come within an hour, with the results due later Sunday.

The so-called “Lex Netflix” vote is on an amendment to the Film Production Act adopted by parliament last October.

Since 2007, domestic television broadcasters have been obliged to invest four percent of their turnover in Swiss film-making.

The law change is intended to catch up with the dramatic shift in how audiovisual content is now consumed, with global streaming platforms like Netflix, Disney+ and Blue now making hundreds of millions of dollars in Switzerland each year.

Furthermore, the platforms will be required to ensure that European-made films or series make up at least 30 percent of the content available in Switzerland, as in the neighbouring European Union.

Right-leaning opponents collected enough signatures to take the change to a referendum.

If the challenge fails, streaming services would have to submit to the four-percent rule.

The referendum looks set to pass by a narrow margin, according to recent opinion polls, although opposition has been growing.

The vote on changing the organ donation laws would see everyone become a potential donor after death unless they have expressly opted out.

Currently, transplants are only possible if the donor consented before they died.

The government and parliament want to change the law to a “presumed consent” model — as used in a number of other European countries.

Relatives would still have the right of refusal if they suspected that the deceased would not have wanted to be an organ donor.

A group of opponents, backed by the populist and religious right, gathered enough signatures to force a referendum.

At the end of 2021, more than 1,400 patients were awaiting transplant organs in Switzerland, a country of around 8.6 million people.

But 72 people died in 2021 while on the waiting list, according to the Swisstransplant organisation.

Ties between Brussels and Bern have been strained since May 2021 when non-EU Switzerland suddenly decided to end years of discussion towards a broad cooperation agreement with the bloc.

The Frontex vote could add to the unease.

Under Europe’s expansion plan, Frontex would have a permanent contingent of 10,000 border guards and coast guards.

The government has warned if voters reject the expansion, Switzerland risks automatic exclusion from the Schengen area.

In February, the Swiss voted to tighten their notoriously lax tobacco laws by banning virtually all advertising of the hazardous products.

Swiss vote sparks question if immigration is boon or bane