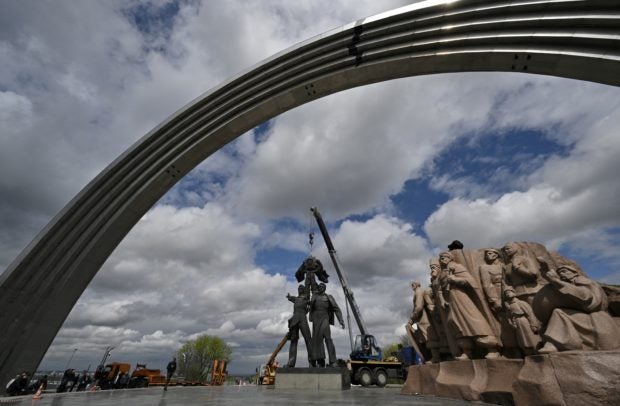 Workers dismantle the Soviet monument to Ukraine-Russia friendship in Kyiv on April 26, 2022, amid Russian invasion of Ukraine.  AFP FILE PHOTO

KYIV—Kyiv Saturday renamed an iconic Soviet-era arch symbolising ties with Moscow to “Arch of the Freedom of the Ukrainian People”, the mayor said.

The symbolic move comes after the city demolished a statue of two workers — one Russian and the other Ukrainian — under the arch last month.

“The city council today decided to ‘de-communise’ the name of the Arch of the Friendship of the Peoples. It will now be the Arch of the Freedom of the Ukrainian People,” the capital’s mayor Vitali Klitschko said on Telegram.

He said officials had also “approved a list of more than 40 monuments and memorial plaques that will have to be removed from streets and buildings of the capital and transferred to a museum of totalitarianism.”

He said renaming them all would take time and involve “specialists”, mainly historians, “so as not to take a hasty decision”.

The arch is an imposing 35-meter-high monument that towers over central Kyiv. It was erected in 1982.

Many Kyiv residents have called for plaques across the city linked to Russia and its ally Belarus to be replaced.

The Kyiv metro has held online surveys on how to rename stations.

Users have voted for the “Minsk” station to become “Warsaw” station, and for the “Leo Tolstoy Square” stop to instead celebrate Vassyl Stus, a Ukrainian dissident who died in the Soviet gulag.

TAGS: Arch of the Freedom of the Ukrainian People, Kyiv, monument