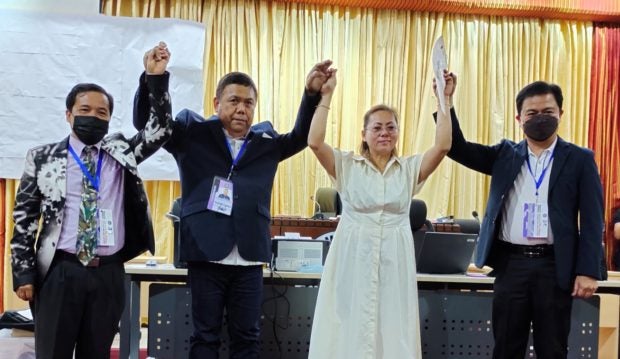 Members of the Provincial Board of Canvassers of Misamis Occidental proclaimed Rowena Gutierrez as duly elected vice governor of the province. Photo by Neptalie Batolenio

Rowena Gutierrez, who substituted for her slain husband, was proclaimed winner in the race, along with the provincial slate headed by outgoing Rep. Henry Oaminal who was elected governor.

Provincial election supervisor Carlito Ravelo said that the votes Gutierrez got were counted as votes for his wife Rowena.

Gutierrez got over 200,000 votes against the more than 90,000 of her closest rival, Richard Centeno.

Rowena Gutierrez thanked everyone who supported her during the campaign especially after her husband died. Gutierrez was hit by sniper fire on December 22, 2021 while the slate headed by Oaminal had a Christmas party in Tangub City. He died three days later in Manila.

She added that the people can expect good service from her by the time she takes office as vice governor.

In Ozamiz City, the local slate of Oaminal’s son, Henry Jr., swept all elective posts on May 9. Henry Jr. will replace his brother, Sancho Fernando, who won the seat to be vacated by their father.