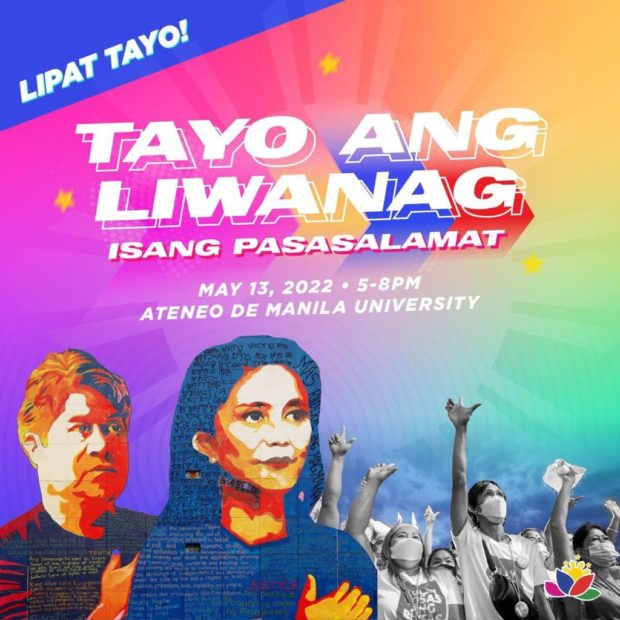 MANILA, Philippines — The venue for the thanksgiving event of Vice President Leni Robredo and Senator Francis “Kiko” Pangilinan on Friday, May 13, has been changed.

From the Liwasang Aurora in Quezon Memorial Circle (QMC), it would now be held in the Ateneo de Manila University (AdMU) campus on Katipunan Avenue also in Quezon City.

In a statement, the Leni-Kiko camp said the Quezon City government has decided to not grant a permit for the thanksgiving event for volunteers and supporters dubbed “Tayo Ang Liwanag: Isang Pasasalamat” inside QMC.

(Although we regret this, we respect the local government’s decision. We look forward to meeting friends, fellow volunteers, supporters, and fellow Filipinos at the Ateneo grounds tomorrow, Friday.)

The Quezon City government said an extensive dialogue between the Quezon City Department of Public Order and Safety (QC-DPOS) and the event organizers determined that the Liwasang Aurora in Quezon Memorial Circle “was not an ideal venue to hold tomorrow’s planned gathering.”

“The QC-DPOS explained that the presence of an enormous crowd (without the benefit of a previously-arranged crowd control plan) on a weekday would cause massive traffic jams, countless stranded commuters, and a significant risk to overall public safety,” the local government said in a statement.

“Given this, the pending permit request for the event was not granted, and the organizers understood and respected their decision,” it added.

According to the latest unofficial tally of the Parish Pastoral Council for Responsible Voting (PPCRV), Robredo was a second-placer as she garnered 14,815,276 votes in the presidential race. PPCRV’s counting was based on electronically transmitted figures from the Commission on Election’s transparency server.

But Robredo has not conceded as of this posting.