Robredo thanks supporters, but she’s not backing down | Inquirer News

Robredo thanks supporters, but she’s not backing down 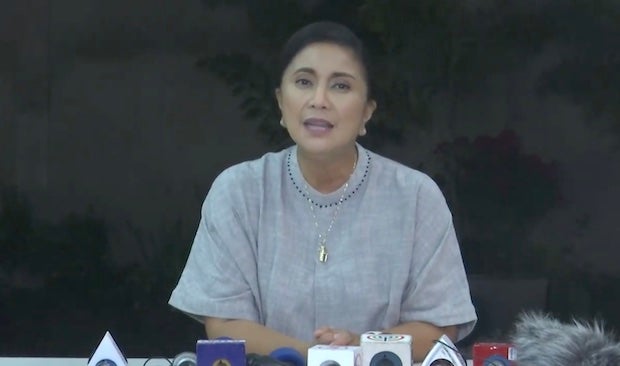 Vice President Leni Robredo delivers a statement in the early hours of Tuesday, May 10, 2022. (Photo from a livestream video on her Facebook page)

MANILA, Philippines — Vice President Leni Robredo has not bowed out of the presidential race, but she chose to issue a statement to thank volunteers and supporters who joined her People’s Campaign, which she called a movement for democracy and for a new brand of politics.

Early Tuesday morning in Naga City, Robredo made a live-streamed video statement on Facebook thanking everyone who participated in the grassroots campaign — including the house-to-house tour of some of her supporters, who risked their jobs and their names just to ask people to vote for her.

“First of all, let me thank you — all of you who voted for me, who convinced their families, friends, acquaintances, and even those who they did not know, who did so in so many ways. To all those who staked their careers and their names in sharing our message,” she said in Filipino.

“To all those who gathered in rallies, who conducted house-to-house campaigns; who posted tarps; who posted on social media; who wrote, who made videos and advertisements; to the medics; to those who voluntarily cleaned up after our rallies; to those who played music and lent their voices to show the power of the people who had seen hope — no number can measure the depth of your love. Thank you very much to all of you,” she added.

According to Robredo, her followers have created something special — a movement initiated by the people, which she considers a big victory in itself.

“Let’s be assured by your contribution: We have started something that has never been seen in the whole history of the country — a campaign led by the people,” she went on.

“This is a movement that was formed not only to dismantle an old and decaying system but also to forge a true and positive change. You have embodied democracy, not only in voting but also in showing your love for fellow Filipinos. This is a very big victory. And our campaign can only be considered a failure if we allow the unity we have formed to fall apart,” she added.

There was initially confusion as to whether Robredo had conceded the presidential race, as she said that the voice of the people was becoming clearer in the elections.

“I know that it’s not easy for you to accept the number coming out of the quick count. It’s clear that it’s not only disappointment but dismay that our side feels. Nevertheless, I tell you: I know we love the country, but this love should not be the cause of divisiveness,” Robredo said.

She also noted that all the votes had not been counted and that there were issues still unresolved.

But she said: “The voice of the people is becoming clearer and clear. In the name of the Philippines that I know you also love, we need to listen to this voice because in the end we only we have once country that we share.”

As of 3:50 a.m. on Tuesday, the partial and unofficial count from the Commission on Election’s transparency server showed that Marcos has 29.69 million votes, way ahead of Robredo’s 14.16 million votes.

We should listen to the voice of voters, says Leni Robredo