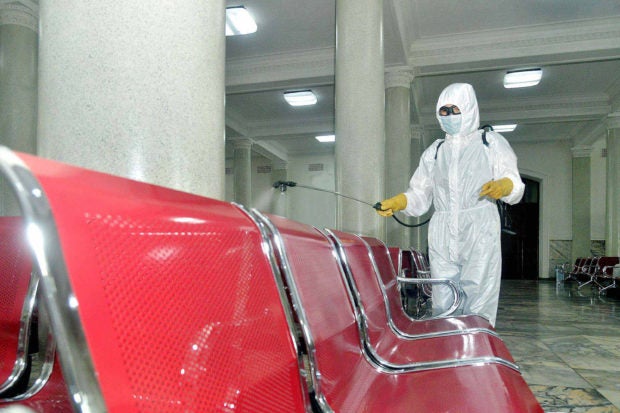 This undated picture released from North Korea’s official Korean Central News Agency (KCNA) on August 29, 2020 shows a station employee disinfecting seating as a measure to prevent the spread of the COVID-19 coronavirus in Pyongyang. (Photo by KCNA VIA KNS / AFP)

SEOUL — North Korea announced its first official cases of Covid-19 on Thursday, saying the highly transmissible Omicron variant had been detected and a national emergency declared.

The isolated country has never reported a case of Covid-19 before, and leader Kim Jong Un has ordered nationwide lockdowns in a bid to prevent the spread of the virus.

Here’s what we know:

Is it a major outbreak?

State media said “persons with fever” at an organisation in the capital Pyongyang had tested positive for Omicron, without specifying how many people were infected.

The virus could already have spread across the country, analysts said, as North Korea celebrated major holidays in April with mass events in Pyongyang, including a military parade at which neither participants nor spectators were masked.

“People from all over the country attended these events and may have carried back the virus,” Park Won-gon, a professor at Ewha University, told AFP.

The fact that North Korea held an emergency Politburo meeting overseen by Kim and issued an immediate report in state media — which typically reports on events a day later — indicates the situation is serious.

It shows “much urgency”, said Yang Moon-jin, a professor at the University of North Korean Studies.

North Korea was one of the first countries to close its borders in January 2020 after the virus first emerged in neighbouring China.

It quickly kicked out all foreigners — including diplomats and international aid workers — and has blocked inbound travel, keeping itself in strict isolation for more than two years.

But experts said it was inevitable that Covid-19 would sneak in, with outbreaks in all neighbouring countries.

The virus could have come from a human making an illegal crossing from China, or via an infected animal, like a bird or boar, which cross the border freely, experts say.

North Korea and China suspended rail trade in April this year due to Pyongyang’s fears of infection, but sea cargo shipments continued.

“North Korean seamen may get infected while interacting with other crews, eventually passing the virus onto port crew,” Seoul-based specialist site NK News said in an analysis.

What will they do?

With crumbling health infrastructure, no vaccines and no anti-viral treatments, North Korea has very limited options.

Kim has called for a nationwide lockdown, according to KCNA, although details of the restrictions were not immediately provided.

“North Korea will likely do the same as China,” said Go Myong-hyun, a researcher at the Asan Institute for Policy Studies.

But unlike China, North Korea has not vaccinated anyone, and lacks the capacity to conduct mass Covid-19 testing. It also has little ability to treat people who become really sick.

As a result, the country “could see a lot of deaths”, said Lim Eul-chul, a professor at Kyungnam University.

Do they want help?

North Korea’s announcement comes days after South Korea inaugurated a new president, and a week before US President Joe Biden is due to visit Seoul.

Pyongyang has previously repeatedly rejected offers of pandemic assistance — and vaccines — from relief groups, the World Health Organization and even its main benefactor China.

It is unlikely Kim will ask for help now.

To do so would be “acknowledging the failure of the emergency anti-epidemic system in place until now and will inflict considerable damage to Kim Jong Un’s leadership”, Lim said.

Even so, South Korea’s new government has allocated a budget to send Covid vaccines to the North, Kwon Young-se, the nominee for unification minister, said at his confirmation hearing.

Impoverished North Korea chooses to spend a significant chunk of its GDP on its banned weapons programmes, despite widespread food insecurity.

Its pandemic border closure exacerbated its economic woes, prompting its biggest contraction in over two decades in 2020, according to South Korea’s central bank.

Kim has repeatedly pledged to solve the “food, clothing and housing problem for the people” but has pushed ahead with missile launches — more than a dozen this year — and signs indicate he may restart nuclear tests.

“The Kim regime’s domestic audience may be less interested in nuclear or missile tests when the urgent threat involves coronavirus rather than a foreign military,” said Leif-Eric Easley, a professor at Ewha University.

However, professor Yang said that if public fears over an outbreak were to spread, Kim might go ahead with a nuclear test “to divert this fear to another place”.