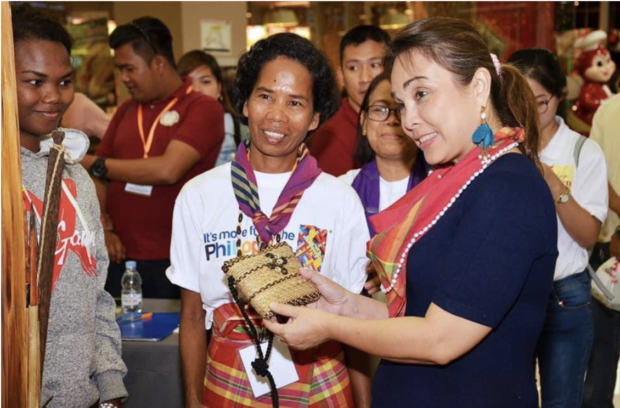 Loren Legarda with women weavers of Schools of Living Traditions (SLT) Dao from the indigenous Ati Tribe in Tobias Fornier, Antique who weave bags, purses, and jewelry boxes made of nito and buri. CONTRIBUTED PHOTO

MANILA, Philippines — Incoming Senator Loren Legarda has expressed her aim to expand the scope of the culture-based livelihoods, which are successfully being conducted in her home province, Antique.

According to Legarda, the Philippines is rich in culture-based livelihoods such as handicrafts, pottery, weaving, and embroidery that deserve recognition and should also be developed as they are part of Filipino identity.

Legarda has assisted all 18 municipalities of Antique in showcasing their products that include muscovado, tablea, handwoven patadyong, and hand-made pots—and handicrafts made of nito, bariw, buri, abaca, and bamboo—in addition to the training and seminars or the provision of equipment and raw materials in partnership with the DTI.

Recently, Legarda launched the Antique Trade and Tourism Fair in the newly restored Old Capitol Building, an event made possible in coordination with the DTI, the Provincial Tourism Office, and the Office of the Provincial Agriculturist, and the Antique Hotel and Restaurants Organization.

She also emphasized the need to empower local communities and indigenous peoples, who are the bearers of our culture.

Legarda, the Dangal ng Haraya Award: Patron of Arts and Culture by the National Commission for Culture and the Arts (NCCA) recipient, has advocated for and initiated various programs for the promotion and preservation of Philippine Art and Culture. She supported micro-enterprises like the Bagtason Loom Weavers Association (BLWA) in Bugasong, the Malabor Abaca – Piña Weavers Association (MAPWA), and the Tibiao Active Weavers and Knitters Association (TAWKA) in Tibiao; among many others. Assistance was made possible with government programs that aim to improve their products and sustain their businesses.

Weaving communities all over the country, such as those in Ifugao, Bulacan, Palawan, Camarines Norte, Aklan, Antique, South Cotabato, and Zamboanga del Sur, have also benefited from her support, And so have local artisans and communities through the Assistance for Artisans program of the NCCA.