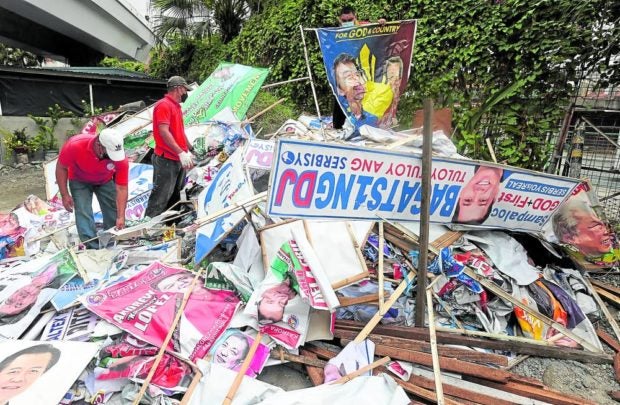 HAUL: Workers from the Metropolitan Manila Development Authority prepare to haul a pile of campaign materials taken down along the stretch of España Boulevard in Manila on
Feb. 18, 2022, as the Commission on Elections starts “Oplan Baklas.” (Photo by MARIANNE BERMUDEZ / Philippine Daily Inquirer)

MANILA, Philippines — The Department of the Interior and Local Government (DILG) has asked candidates and local government units (LGUs) to clean up all campaign-related waste materials used during the recently-concluded elections, saying that reusable materials must be recycled or upcycled.

According to Interior Secretary Eduardo Año on Wednesday, this should be the first order of business after the election, encouraging both winners and non-winners to take the initiative to remove campaign materials.

“Clean-up of election litter is the first order of business after the polls. Aside from incumbent LGU officials, we urge all candidates, winners and non-winners alike, to take it upon themselves to lead in the removal of their campaign materials,” Año said.

“Hinihimok din po natin ang ating mga kababayan na makiisa sa clean up drive ng kanilang LGUs at barangay. We have done our part in exercising our right to vote. Let’s continue to participate in governance through our simple ways of cleaning up our neighborhood from election litter,” he added.

DILG said that this was also contained in an advisory to local chief executives, as they reminded too that the disposal of the election materials should coincide with “environmental laws and local ordinances and regulations against illegal dumping, open burning, and littering.”

“Impose the responsibility to the organizers of political activities, to ensure that waste generated by their activities, and their attendees will be properly managed and disposed of,” Año said in the advisory.

Similarly, the DILG chief warned that improper disposal of materials may have a negative impact on public health — adding that it must be in accordance with Republic Act No. 9003 or the Ecological Solid Waste Management Act, which says that “segregation and collection of solid waste shall be conducted at the barangay level specifically for biodegradable, compostable and reusable wastes.”

Campaign waste for the 2022 polls may be big, as national positions were hotly contested, and there were 10 candidates vying for the presidency and nine for the vice presidency.

As early as October, several pro-environment groups have asked the Commission on Elections to initiate pro-environment measures to ensure that campaign waste would be limited, and environmental rules would be observed.