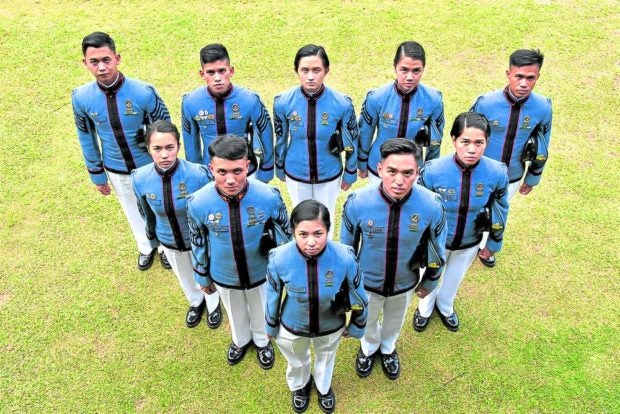 TOP GRADUATES The top 10 graduates of the 214-member Philippine Military Academy’s “Bagsik Diwa” Class of 2022, led by Cadet First Class Krystlenn Ivany Quemado (bottom center), will be commissioned as junior officers on May 15 during their commencement exercises in Baguio City. —EV ESPIRITU

BAGUIO CITY, Benguet, Philippines — The daughter of a soldier and a teacher from South Cotabato province will be receiving the presidential saber from President Rodrigo Duterte this weekend for topping the graduating Philippine Military Academy (PMA) “Bagsik Diwa” Class of 2022.

Cadet First Class Krystlenn Ivany Quemado, the 21-year-old valedictorian who is joining the Philippine Navy, is one of five female cadets on the Top 10 list.

Quemado is the seventh woman to top a PMA class since it began accepting female cadets in 1993.

The 214 members of Bagsik Diwa will be commissioned as junior officers of the Armed Forces of the Philippines on May 15 by President Duterte, his last task for the country’s premier military training school as commander in chief.

The PMA is staging its first in-person commencement exercises since the pandemic broke out and will include cadets’ parents, relatives and dignitaries as guests.

Minong, a Muslim, and Rico have been friends since Grade 7. They both took the PMA entrance examinations when they were in senior high school in Zamboanga City and were elated to see each other at Borromeo Field along with fellow plebes in 2018.Degree

Quemado, who hails from Koronadal City, said she was raised to be a public servant.

“As a kid, my mother used to bring me along when she taught at a grade school, so I found the passion to share what I learned with other people,” she said.

Some of the cadets were enrolled in university courses before joining the PMA, but 131 Bagsik Diwa members took the entrance exam after finishing senior high school.

Bagsik Diwa is the first class to complete a degree in the PMA’s bachelor of science in national security management, said Lt. Gen. Ferdinand Cartujano, the PMA superintendent.

The academy’s curriculum, he said, has been evolving to address future forms of warfare, such as the weaponization of cybertechnology.

For the second year, the PMA has offered a bachelor of science in information technology (BSIT), said Lt. Col. Marlon Ray Bambico, who oversees the school’s IT programs.

He said 205 plebes of the 351-strong “Siklab Laya” Class of 2025 had enrolled in BSIT, which would help build cybersecurity experts for the military.