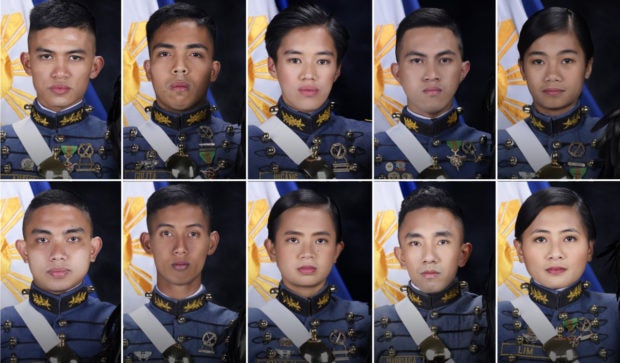 BAGUIO CITY, Benguet, Philippines — The COVID-19 pandemic has shaped this year’s Philippine Military Academy (PMA) graduating class into future military officers who are prepared to do more and “be more” than just “protectors of the people.”

The class valedictorian, Cadet First Class Janrey Artus, said that new and “different roles” awaited him and the 163 other members of PMA Masaligan Class of 2021 who completed their last year of training while seated a meter apart in small groups or in virtual classrooms.

Humanitarian work, particularly during times of crises like COVID-19, has always been part of the Armed Forces of the Philippines’ tasks as “protector of the people,” Artus said in an online news briefing on Monday.

Raised in San Enrique town by his parents Florencio, a former Army technical sergeant who served for 10 years in Marawi City, and Jocelyn, a retired math and music teacher, Artus was two months away from completing his degree in chemical engineering at the University of the Philippines (UP) Visayas in Iloilo province when he passed the PMA entrance test.

“He did not finish his studies in UP when the call from PMA came,” Florencio said. He described his son, the third in a brood of four, as a consistent honor student from elementary to college.

“He is a good person, serious in his studies, and does not have any vices,” he added.

In a recent Facebook post, Artus expressed the need for people to step up and become responsible citizens of the country.

Perez, the class president and baron, said the pandemic showed them that there were more ways to serve the public.

“The usual connotation [ascribed to the military] is we are here to protect you and secure the land. But we realize today that we have to be more,” Perez added, citing soldiers who “act as front-liners when assisting medical workers.”

“We realized it is more about our individual efforts as leaders…, [acting] in simple ways like helping our community pantries, helping out our neighbors, [or] simply empathizing with them,” he said.

All 164 members of the graduating class composed of 138 males and 26 females will be commissioned as junior officers of the AFP during the May 10 commencement exercise.

The PMA has yet to receive word if President Duterte will lead the program through video conference.

Last year, the graduation rites were held behind closed doors with parents of the cadets barred from attending to prevent the spread of COVID-19.

Like other schools and universities, the PMA had to quickly adjust to health restrictions, said Col. Jose Demar Pauly, head of the academics group.

All cadets were required to wear masks and face shields while attending classes and participating in mandatory military training.

A major concern for the academy last year was poor internet connectivity. Fortunately, it was resolved by improving the bandwidth so online lectures could proceed smoothly, Pauly said.

A COVID-19 outbreak, however, broke out on campus between December 2020 and January this year, with 72 people infected, including 53 cadets, some faculty members and the school’s kitchen staff.

Before COVID-19 struck, the academy was in the middle of reforms because of the hazing death of Cadet Darwin Dormitorio in 2019.

But changes were now in place to help mold cadets into “champions of human rights,” said Col. Julius Tomines, PMA commandant of cadets.

According to him, the academy has programs of instructions that are “attuned to the call of the times and responsive to the tactical and operational needs of the AFP.”

The school’s tactical officers are also being provided fresh training, having recognized their role “as positive influencers since they are the ones with the cadets for 24 hours,” Tomines said.

To stop maltreatment on campus, the PMA has also segregated each cadet level by assigning them their own barracks, he added.

—WITH A REPORT FROM CARLA GOMEZ INQ