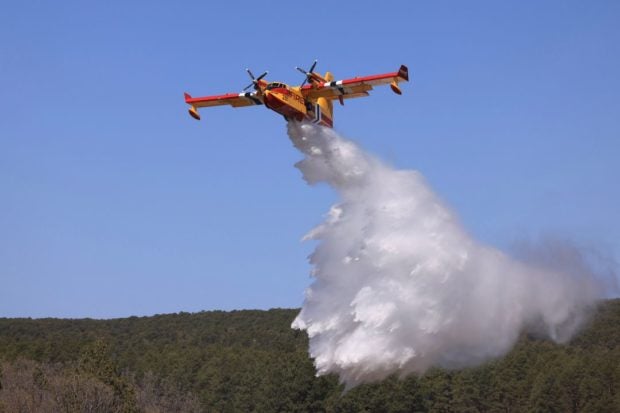 In all New Mexico was battling at least six wildfires, the worst of them burning the mountains and canyons just east of the capital of Santa Fe, amid extremely hot, windy and dry weather that Governor Michelle Lujan Grisham called “the worst possible set of conditions for any fire.”

The Hermits Peak/Calf Canyon complex had burned 172,284 acres as of Saturday, officials said, the equivalent of 269 square miles (697 square km) or nearly 90% of the land area of New York City, destroying at least 170 homes and forcing 16,000 evacuations, officials said.

Worse yet, sizzling temperatures and powerful winds were forecast for another five days in what firefighters have deemed a “historic fire weather event.”

Dave Bales, U.S. Forest Service incident commander for the Hermits Peak/Calf Canyon fire, told reporters that helicopter and airplane pilots started early on Saturday and flew all morning, but gusty winds picked up around midday and grounded the fleet.

“They had to sit down due to the heavy turbulence and the lack of visibility with the smoke,” U.S. Forest Service Incident Commander Todd Abel told a briefing.

“We were flying them all the way up until then, but the safety of the aerial firefighters was being pushed.”

Saturday’s wind speeds of 30 mph with 60 mph gusts (48 to 96 kph) were expected to increase on Sunday. Meanwhile, relative humidity of 35% was forecast to dip to a bone dry range of 6% to 16% on Sunday, firefighters said. “Extreme burning conditions” were expected until Tuesday, they said.

KOAT television showed a helicopter dipping a vat attached to a cable into a lake, while planes skirted billowing smoke to drop water and fire retardants over flames.

Firefighters on the ground were rotating in and out, using hand tools and bulldozers to create fire breaks.

The Hermits Peak/Calf Canyon fire was 21% contained on Saturday, but pockets of unburned forest remained behind the fire lines, meaning it had plenty more fuel, Bales said.

The fire consists of two blazes that ignited about two weeks apart and later merged into one, the first originating from a prescribed-burn project that got out of control. The cause of the second remains under investigation, officials said.

At least five others raged elsewhere in the state.

One of them, the 59,000-acre (238 square km) Cooks Peak fire a little further to the northeast from the main blaze, was 97% contained, meaning resources could soon be diverted elsewhere in the state, Lujan Grisham said.