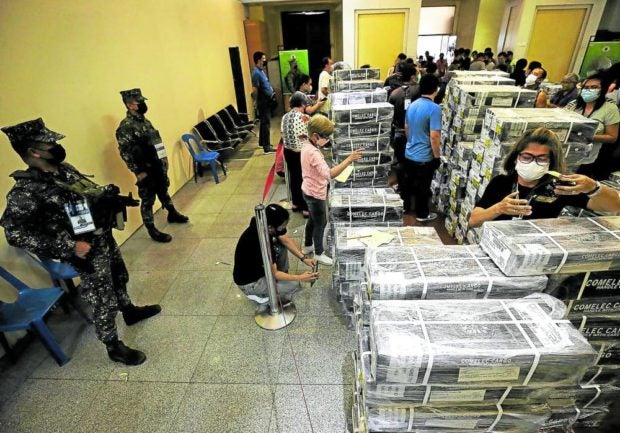 WRAPPING UP Nearly 2,000 bundles of ballots are being prepared for delivery to Manila from the National Printing Office on Thursday, as the Commission on Elections wraps up its preparations for Monday’s national and local elections. —RICHARD A. REYES

The unofficial results showing the winners of the presidential and vice presidential elections will be known just days after the May 9 polls and much sooner for the local contests, Commission on Elections (Comelec) officials said on Thursday as they wrapped up preparations for Monday’s balloting.

The Comelec also expects results from senatorial election within three to four days after the polls close, they said.

“By the seventh day we can already see the winning president and vice president based on partial and unofficial results,” Commissioner George Garcia told reporters in a briefing.

“We will have the proclamation of the president by the first week of June,” he added.

He said Congress will start its work as the official national canvassing body for the presidential and vice presidential polls once the Senate and the House of Representatives resume sessions on May 23.

“Of course, even before that, even after two or three days after voting, partial unofficial results will be coming out from the citizens’ arm, media because they have access to our transparency server,” Garcia said.

Garcia said that “based on our experience” since the 2010 polls, winners of the Senate race would be proclaimed starting as early as May 15.

Winners of the local elections could be proclaimed by the Comelec as early as the evening of May 9. These are the mayors, vice mayors and members of the municipal councils, “at least in smaller municipalities,” Garcia said, adding that it may take a little longer for the contests in cities.

The elected governors, vice governors and provincial board members would be known at the latest at noon on the day after the polls.

“Congressmen can also be proclaimed the next day, which is May 10,” Garcia said.

The Comelec has already deployed 106,174 vote-counting machines (VCMs) nationwide, each with a corresponding secure digital (SD) card, which contains instructions to the equipment on the counting of the ballots.

Comelec Commissioner Marlon Casquejo said that 355 of 56,864 machines that were subjected to final testing were found defective and 44 SD cards needed replacement.

These numbers are “very minimal” compared to around 500 VCMs and around 3,000 SD cards that did not work during the final testing in the last elections in 2019, he said.

Casquejo, chair of the election steering committee, said all the 44 defective SD cards had been replaced and the 355 defective VCMs were brought to the repair hub in Sta. Rosa, Laguna, to fix “mechanical” problems mostly involving their scanners.

“This is normal since the machines are about nine years old,” he said. “They’ve been used three times although we repaired them, refurbished them.”

Nearly 50,000 more VCMs have to undergo final testing and sealing in the next two days to confirm that they are in good condition.

The Comelec has 1,100 machines for contingency in case any of the VCMs fail to work on Election Day and cannot be repaired by assigned technicians.

It has refurbished the more than 97,000 VCMs used in the 2019 elections and leased 10,000 more from Smartmatic, the country’s automated elections supplier since 2010.

“I can assure everyone—the public, the political parties, the candidates—that there will be no problem with our VCMs,” Casquejo said.

“The Comelec is in control of the situation. There will be no failure of elections. We have all the procedures. If worse comes to worst on Election Day and we will run out of contingency machines, the election will continue,” he said. In such a case, a precinct can borrow another VCM from another precinct, he said.

Commissioner Aimee Ferolino said almost all the election supplies to be used on Election Day had been distributed to their respective polling precincts.

These include batteries for each of the VCMs, 5,794 broadband global area networks, 53,107 ballot boxes and 1,715 consolidation and canvassing system kits.

Garcia also dismissed fears being spread in social media posts that some votes might be invalidated if the ink used to shade ovals next to the candidate’s name on one side of the ballot leaks to the other side, spoiling it.

“No truth to that. Pure speculation,” said Garcia.

He assured the public the ovals beside the names of candidates on the front side of the ballot do not align with those on the back.

Garcia said the canvassing of the ballots would be faster this time after the Comelec fixed the cause of the seven-hour delay during the 2019 midterm ballot that was due to a backlog.

In the previous presidential election, Liberal Party standard-bearer Mar Roxas conceded to Rodrigo Duterte on May 10, 2016, just a day after the elections when the unofficial Comelec tally showed the Davao City mayor as the clear winner. Sen. Grace Poe conceded to Mr. Duterte in a phone call on May 9, 2016.

In the May 2010 elections, Sen. Benigno Aquino III established a huge lead over former President Joseph Estrada and other candidates on May 10, the day of the elections.

On May 11, 2010, Sen. Manny Villar conceded to Aquino. He was then followed by Gilbert Teodoro and Sen. Richard Gordon.In 2016, the Parish Pastoral Council for Responsible Voting (PPCRV), the Comelec’s citizens’ arm, ended its quick count on May 18 with results transmitted from 96.14 percent of 94,276 precincts.

In 2010, PPCRV ended its quick count with 91.6 percent of transmitted results. —WITH A REPORT FROM INQUIRER RESEARCH