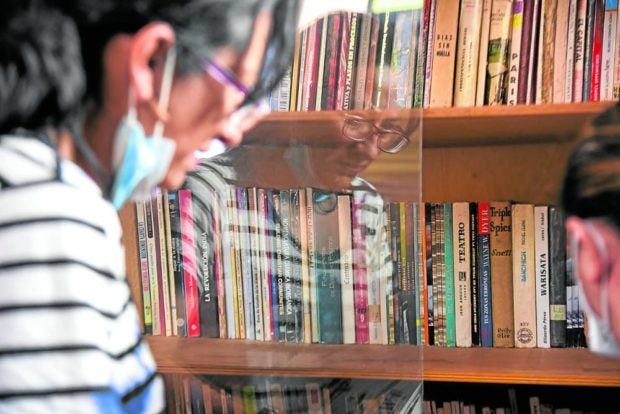 Milred organises books at the prison that offers her and fellow inmates access to a small library as part of a program that aims to spread literacy and offer the chance to get out of jail earlier, in La Paz, Bolivia April 29, 2022. Picture taken April 29, 2022. REUTERS/Claudia Morales

LA PAZ—Inmates in Bolivia’s overcrowded prisons are now able to reduce their jail time by reading books in a new program influenced by one in Brazil that aims to spread literacy and give hope despite a notoriously slow judicial process.

The state program “Books behind bars” offers detainees a chance get out of jail days or weeks in advance of their release date. Bolivia does not have a life sentence or death penalty, but pretrial detention can last for many years due to a slow judicial system.

The program has been launched in 47 prisons that do not have resources to pay for education, reintegration or social assistance programs for prisoners, the Andean country’s Ombudsman’s Office says.

So far, 865 inmates are sifting through prose, improving their reading and writing skills. One of them is Jaqueline, who has already read eight books in a year and has passed four reading tests.

“It is really hard for people like us who have no income and who do not have family outside,” she said. “There are people here, for example, who are just learning how to read and write.”

Nadia Cruz with the Ombudsman’s office said the intention is to encourage inmates awaiting trial.

“That is important because what is reduced (on the sentences) is relatively little, it is hours or days in some cases, depending on what the board decides,” she told Reuters.

With a daily salary of 8 bolivianos ($1.18), incarcerated Bolivians are forced to work to be able to eat and pay the high court costs to be released.

The country’s prisons and jails have long suffered from overcrowded and unsanitary conditions, with some detainees staging protests over the lack of health care, according to Human Rights Watch.

Amid these difficulties, learning to read can be like escaping the prison walls, at least in the mind, said Mildred, an inmate at the Obrajes women’s prison in the highland city of La Paz.

“When I read, I am in contact with the whole universe. The walls and bars disappear,” she said.

READ: Bible-only reading at US jail