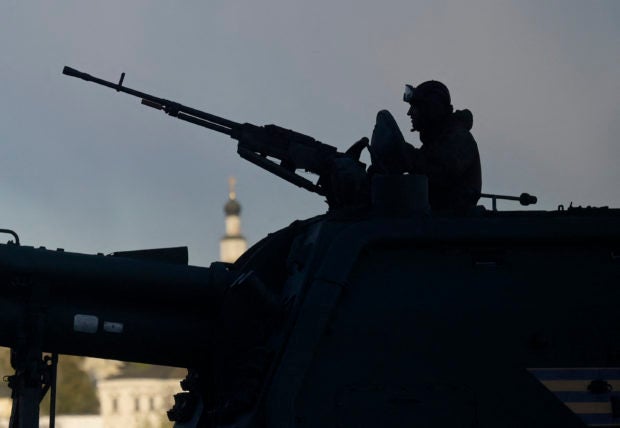 Russian military vehicles drive along the Garden Ring road towards the Red Square for a rehearsal of the Victory Day military parade, in central Moscow on May 4, 2022. – Russia will celebrate the 77th anniversary of the 1945 victory over Nazi Germany on May 9. (AFP)

MOSCOW – Russia on Wednesday said its forces had practised simulated nuclear-capable missile strikes in the western enclave of Kaliningrad, amid Moscow’s military campaign in Ukraine.

The announcement came on the 70th day of Moscow’s military action in the pro-Western country, with thousands killed and more than 13 million displaced in the worst refugee crisis in Europe since World War II.

After performing the “electronic” launches, the military personnel carried out a manoeuvre to change their position in order to avoid “a possible retaliatory strike,” the defence ministry added.

The combat units also practised “actions in conditions of radiation and chemical contamination”.

The drills involved more than 100 servicemen.

The Kremlin chief has warned of a “lightning fast” retaliation if the West directly intervenes in the Ukraine conflict.

Observers say that in recent days, Russia’s state television has attempted to make nuclear weapons use more palatable to the public.

“For two weeks now, we have been hearing from our television screens that nuclear silos should be opened,” Russian newspaper editor and Nobel Peace Prize laureate Dmitry Muratov said on Tuesday.