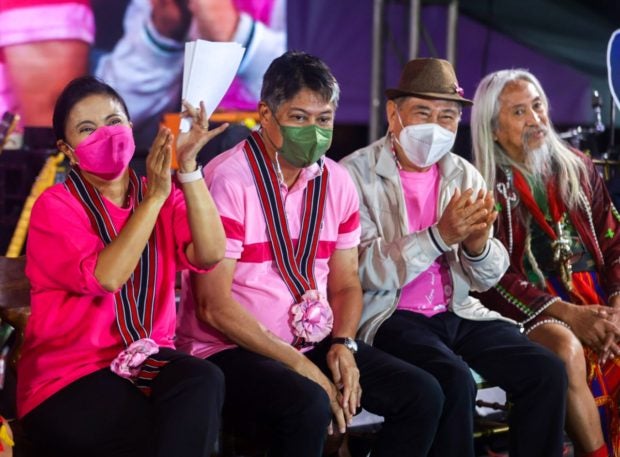 MANILA, Philippines — Three national artists have spoken out in Baguio City about the upcoming 2022 national elections, saying that they have decided to back Vice President Leni Robredo’s candidacy as her campaign provides light amid an impending “darkness.”

National Artist for Film Kidlat Tahimik said before the 30,000-strong crowd in Baguio on Monday that the people must not be dissuaded by talks that another candidate has already won, because the people have an alternative candidate in Robredo.

According to Kidlat, the people must remain hopeful that the dark days of martial law will not return.

He also stressed that the Filipino people can overcome any darkness today as they did throughout the course of history — from the Spanish occupation, the American invasion, up to the martial law regime.

Kidlat said that at this time, the light that gives the people hope is Robredo and her slate.

Prior to the two artists’ speech, National Artist Virgilio Almario also reaffirmed support for the Robredo-Pangilinan tandem, saying that only the Vice President responded to their call to protect the Filipino culture.

Robredo’s campaign has seen a snowballing of support in recent weeks — from sectoral groups, local officials, priests, and artists like Almario, Kidlat, and Cabrera.  However, latest surveys from Pulse Asia showed that Robredo is still a far second to frontrunner and former senator Bongbong Marcos.

However, Robredo’s camp remains confident about their chances, saying that the momentum is still on their side.