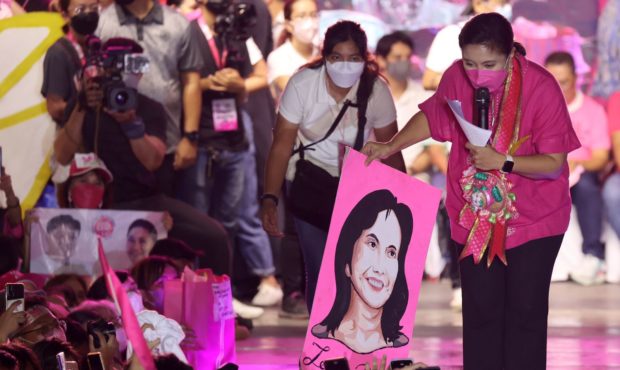 Supporters raised their glasses for Vice President Leni Robredo during the Tagayan, a ritual sealing the “Quezonduan” between presidential candidate and the people of Quezon on April 28, Thursday at the Quezonduan: Grand People’s Rally in Lucena City, Quezon. They also gave artworks and other tokens to Robredo. (VP Leni Media Bureau)

MANILA, Philippines — National Artist for Literature Virgilio Almario, also known by his pen name Rio Alma, has revealed that artists have asked all presidential candidates in the 2022 polls to support their plans for cultural protection and preservation, but only Vice President Leni Robredo responded to the query.

During his speech in Baguio City on Monday, Almario — who has endorsed Robredo’s candidacy — said that the artists were concerned at the ongoing cultural degradation as Filipinos can proudly vote for corrupt officials but give wrong answers when asked about the country’s heroes.

(You know, my fellow Filipinos, we have been angry for so long at corruption in our government.  But every election, we elect thieves and corrupt officials.  We easily fall for the Tallano gold, but we do not even know who the GomBurZa are, right?)

The problem with the culture was so bad that Almario said they had to ask the candidates if they are willing to support their cultural programs, but only one of the 10 bets responded — Robredo.

(That’s why these past few months, we thought that this election is very important.  That’s why we artists and cultural workers united to ask each candidate if they will support our culture.  And we did that last January.)

(We created a manifesto and we gave it to the offices of other candidates.  You know what happened?  Of all the 10 candidates, only one answered our question.  And ever since, especially when we got together last February 14, we national artists became “kakampink.”)

Almario said that a vote for Robredo is important as he believes she, along with her entire slate, can help bring change into the country.

(And on this day, we want to reiterate our call to support kakampink candidates: not only for Vice President Leni, but also for Senator Kiko Pangilinan and the whole Tropang Angat. We need all of them.)

(It is time for the country to change.  Time to remove corruption.  And this would only happen if you would be with us, if you would vote for our fellow kakampink on May 9.)

Two other national artists aside from Almario were present during the Takder Kordi Grand Rally in Baguio City — filmmaker Kidlat Tahimik and visual artist Benedicto Cabrera or BenCab, who also backed Robredo’s candidacy.

Cabrera was one of the artists who participated in the on-the-spot mural painting at the Pasay rally on Robredo’s birthday, while this is the first time Kidlat would go onstage to support the Vice President.

It is unclear how the national artists’ endorsements would affect Robredo’s candidacy.  As of now, latest surveys from Pulse Asia showed that Robredo is still a far second to frontrunner and former senator Bongbong Marcos.

However, Robredo’s camp remains confident about their chances, saying that the momentum is still on their side.