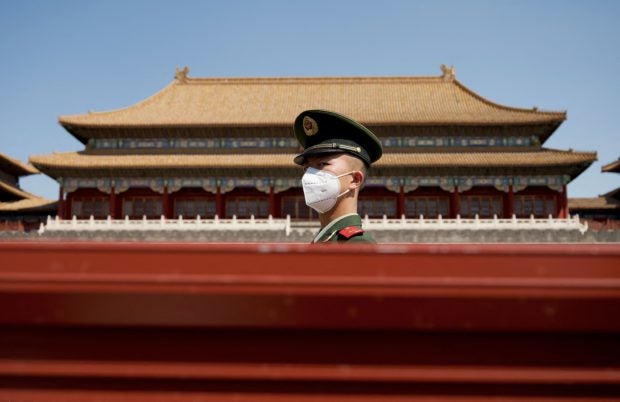 A member of security stands guard at the entrance of the Forbidden City during the first day of the Labour Day holidays in Beijing on May 1, 2022. AFP

BEIJING—Major Beijing tourist venues were virtually deserted Sunday and restaurant traffic ground to a standstill, as a typically bustling public holiday was overshadowed by a Covid outbreak that has shunted millions under lockdown nationwide.

China’s staunch zero-Covid policy has kept the virus at bay for more than two years but it is currently facing its worst outbreak since the start of the pandemic thanks to an Omicron-fuelled wave.

Millions across the country — particularly in economic engine Shanghai — have been pushed to stay at home for weeks, as the lockdowns have dampened economic growth and investor sentiment in the world’s second-largest economy.

Beijing so far has reported over 300 cases under the current wave, and authorities on Saturday banned city-wide dining services starting Sunday to May 4 — an attempt to curb infections during a holiday that is typically an annual peak consumption period.

“It will have a definite impact on sales,” a restaurant employee surnamed An told AFP, as she scanned for customers around Beijing’s Dongcheng district — home to historic attractions like the Forbidden City.

Eateries nearby were shuttered, with some only allowing customers to order takeout if they have a negative covid test.

This restriction is the latest measure ordered by Beijing authorities, who say all visitors to public spaces must have a negative test result within the past 48 hours.

“Of course we will abide by the country’s rules,” An said. But “we make less profit through delivery and our sales volume is lower”.

The Temple of Heaven — one of China’s biggest historical attractions — is usually heaving with tens of thousands of visitors a day elbowing each other. But on Sunday, masked families could snap selfies without any interruptions along the imperial complex.

Even the downtown shopping street Wangfujing — a commerce heaven of food stalls and fashionable outlets — was deserted.

At a restaurant not far from the unusually quiet Forbidden City palace complex, stacks of marinated chicken feet, flatbreads and cold cuts in takeaway containers languished on an outdoor table as staff chatted idly inside.

“Obviously it’s bad in terms of our own self-interest, but it’s necessary overall for the good of the country,” said a young waiter who did not give his name.

Instead of entering the Forbidden City, lines of people waited outside the palace complex to get a swab test — a new normal for Beijing residents.

It was launched in September and has seen more than two million visitors in five months.

The Labour Day holiday was supposed to be a massive commercial coup for the park — which earlier this week had initially required a negative Covid test within 24 hours of visiting.

The capital reported 59 new infections Sunday, as officials announced the reopening of a Covid quarantine hospital that has not been mobilised since the pandemic’s first wave in 2020.

All indoor fitness activities — like public gyms and pools — were suspended starting Sunday until May 4, while authorities say about 4,000 makeshift hospital beds had been prepared and larger quarantine centres were being constructed.

“The epidemic is overall at a high plateau period.”

Meanwhile in Shanghai, officials declared Sunday that “community transmission risk has been effectively curbed” and that daily infections are trending downwards.

The financial hub of 25 million has been locked down for almost a month, with residents complaining of food shortages and lack of timely medical care.