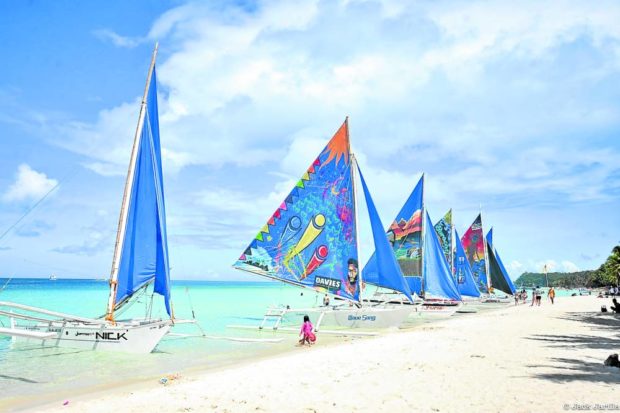 ILOILO CITY, Iloilo, Philippines — The government-set tourist carrying capacity of Boracay Island will remain unchanged at least until this year, according to the Boracay Inter-Agency Task Force (BIATF), rejecting calls from local businesses to ease the tourist cap on the island.

The Aklan provincial government said it would also limit the entry of tourists when tourist arrivals reach the island’s capacity.

Interior Undersecretary Epimaco Densing III said the carrying capacity of the 1,032-hectare island would be maintained at 19,215 tourists at any given time but will be reviewed next year based on a new carrying capacity study.

The carrying capacity of 19,215 tourists at any given time is premised on the fact that, on the average, tourists stay two nights and three days on the island and the net number of tourists is the difference between those arriving and leaving the island.

It is pegged as the maximum number of tourists that the island’s environment can support in consideration of its ecosystem, infrastructure, and population, among others.

The average daily tourist arrivals should be around 6,405 so as not to exceed the island’s carrying capacity, officials said.

Boracay Island’s arrivals in April reached a new two-year high of 186,751, or a daily average arrival of 6,225, surpassing the previous high of 150,597 in January, based on data of the municipal tourism office of Malay, which has jurisdiction over the island.

The highest number of tourists at any time on the island was during the Holy Week, reaching 10,921 on Maundy Thursday (April 14) and 11,140 on Good Friday (April 15), the same data showed.

Historically, the months of April and May have the highest tourist arrivals.

Local government officials and business owners earlier appealed to the national government to reconsider the carrying capacity to allow more tourists on the island and speed up economic recovery crippled by COVID-19 lockdowns and travel restrictions.

They said the rehabilitation projects and other interventions implemented for the past four years should be considered in determining the carrying capacity.

The Department of Tourism earlier called the attention of the local governments of Aklan and Malay town due to a breach in the carrying capacity on Maundy Thursday with 21,252 tourists, and on Good Friday with 22,519 tourists, based on data from the municipal government of Malay.

But Gov. Florencio Miraflores said the island did not “technically” breach the carrying capacity because the data on tourist arrivals excluded the number of visitors who left the island, pointing to data which showed the most number of tourists on the island last month was only 11,140 on April 15.

But he assured that the provincial government would put a cap on tourists going to the island when Boracay’s carrying capacity is reached and would stop issuing quick response (QR) codes to tourists planning to go to the island.

The QR codes are released after tourists have submitted requirements, including confirmed hotel reservations and COVID-19 vaccination certificates or negative swab test results.

The BIATF, which has been supervising the rehabilitation of the island since May 2018, also announced that the island will be turned over to the local government units (LGU) in Aklan when the term of the task force ends on June 30.

Densing said the rehabilitation of the island would still be spearheaded by national government agencies and the LGUs.

The country’s prime tourist destination was closed to tourists for six months in 2018 to undergo rehabilitation. Some of the rehabilitation projects remain unfinished but almost all structures encroaching on the beach and road easements have been removed. Water quality has also vastly improved.