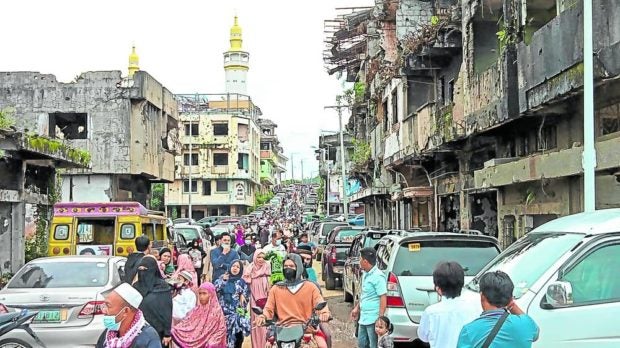 CELEBRATION | Residents fill a street leading to the reconstructed Jameo Mindanao Al-Islamie Islamic Center, the grand mosque inside the city center of Marawi that was heavily damaged during the 2017 siege, as it reopens on Monday in time for the celebration of Eid al-Fitr, marking the end of Ramadan. (Photo by DIVINA M. SUSON / Inqirer Mindanao)

MARAWI CITY, Lanao del Sur, Philippines — For the first time since the five-month siege five years ago, around 6,000 Maranaos flocked to the Jameo Mindanao Al-Islamie Islamic Center of this city to join the Eid al-Fitr prayer on Monday that marked the end of the holy month of Ramadan.

Known as the grand mosque, the Islamic Center has always been a “beloved place of worship” among Maranaos, a defining landmark of the city, said Zia Alonto Adiong, a member of the Bangsamoro Transition Authority Parliament, whose grandfather, the late Sen. Ahmad Domocao Alonto Sr., helped build the mosque.

Like most of the buildings within the city’s most affected area, the grand mosque emerged battle-scarred during the intense fighting between government troops and the Islamic State-linked Maute group since the latter seized Marawi in May 2017 until the city was retaken in October that same year.

The mosque’s repair was completed in October 2021 but the Task Force Bangon Marawi (TFBM) did not yet allow regular visit to the grand mosque because of the ongoing construction works and the presence of heavy equipment, which could pose danger to the lives of worshipers.

At the start of Ramadan this year, the TFBM opened the center every Friday for prayers and acceded to the mosque administrators’ demand to open it during Eid al-Fitr.

As they trooped to the mosque, this city’s displaced residents greeted Eid al-Fitr with renewed hope that they could finally return home and reunite with friends and families.

Hadji Ibrahim Pangarungan, secretary to the administrator of the Islamic Center, said the mosque, which could accommodate 9,000 persons, received an estimated 6,000 people, including those who preferred to perform their prayers outside.

“After this (Eid al-Fitr celebration), we are praying that we would continue performing our Friday prayers here even after Ramadan,” Pangarungan said.

Adiong said the celebration of Eid al-Fitr served as a reminder to the people that in suffering, there would always be relief.

“Eid al-Fitr has always been a time for togetherness, but this year is bound to be different for the people of Marawi City,” he said. “Not only will they be together with friends and family; they will also be together in looking forward to finally coming home.”

Sobair Abantas, a resident in the city’s most affected area, said his family was so happy that after almost five years, they were finally able to perform their Eid prayer at the grand mosque.