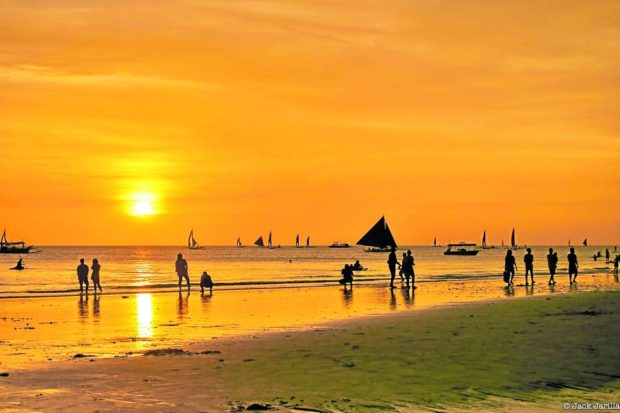 SERENITY | Tourists and residents enjoy the serene sunset on Boracay in this photo taken on April 6, 2022, a week before the Holy Week brought in a crowd to the island’s main beach. (Photo by JACK JARILLA)

MANILA, Philippines — Local officials overseeing Boracay have been warned of administrative charges should they fail to regulate the entry of tourists that might lead to another breach in the government-set cap on arrivals on the island in Malay, Aklan.

Densing, during Wednesday’s Laging Handa briefing, said the DILG also warned the officials could be given a show cause order to explain the continued breach.

“If the carrying capacity exceeds, whether it is their negligence or it is intentional, we will send them a letter to explain, otherwise, they can be held administratively liable for exceeding the requirements of the government, particularly the carrying capacity of Boracay Island,” he said.

The Department of Tourism (DOT), in a statement on Monday, said Boracay had exceeded its carrying capacity during the Holy Week.

Data from the Malay municipal tourism office showed that 21,252 tourists visited the island on April 14 (Maundy Thursday) and 22,519 on April 15 (Good Friday), surpassing the recommended daily threshold of 19,215 tourists at a given time.

Densing said the number of tourists on the island went down to about 18,000 on April 16.Experts’ view

While the tourist arrivals in Boracay started to decrease after the Holy Week, he reminded local officials that the government has monitoring mechanisms so they should ensure that daily tourist arrivals would be between 6,000 and 7,000.

Densing said the government would retain the 19,215 tourist cap “subject to review every three to five years.”

The DOT said increasing the island’s carrying capacity would depend on experts.

“It’s not about lobbying, it’s about studies. If indeed it can be increased, we will rely on the experts, but I believe even pre-pandemic, we never breached the 19,000,” Tourism Secretary Bernadette Romulo Puyat said on Wednesday.

“We will listen to the third-party experts and if they tell [us] that it can be increased, then it can be. But with the studies, we have to take into consideration health and safety. Even tourists don’t want to go to a place that’s overcrowded,” she added.