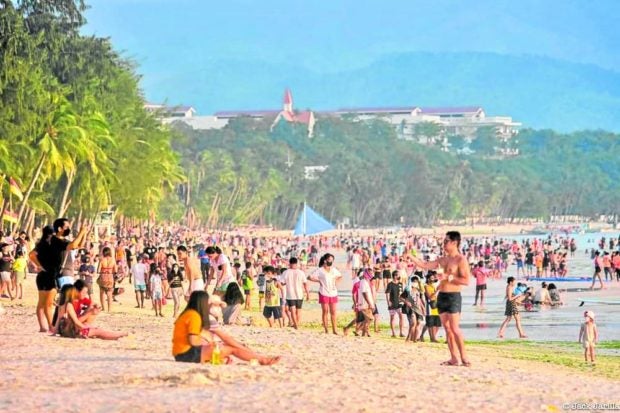 (File) SUMMER CROWD Tourists take their spots on Boracay Island’s white beach on March 6 as hotels, restaurants and other establishments enjoy good business with the surge of visitors this month. —JACK JARILLA

ILOILO CITY—The surge in tourist arrivals on Boracay Island during the Holy Week breached the government-mandated carrying capacity of the island, according to the Department of Tourism (DOT).

“The (DOT) has apprised both the Department of the Interior and Local Government and the Department of Environment and Natural Resources (DENR) of the breach in carrying capacity. We continue our coordination with them, especially the DILG, which has jurisdiction over the LGU (local government unit), to address this concern and prevent similar incidents from happening in the future,” according to a statement Monday.

Data from the municipal tourism office of Malay town in Aklan, where the island-resort is located, showed that 12,266 tourists visited the island on April 14 alone and 24,939 from April 13 to 15.

The tourist arrivals last week is the highest in two years before the COVID-19 pandemic restricted travel.

This is higher than the daily average for the entire month of March, which reached 4,858. Boracay Island was closed to tourists from April 26 to October 25, 2018, to undergo rehabilitation after President Duterte called the island resort a “cesspool” due to problems with pollution, unregulated development, and other environmental concerns.

During the closure, DENR and other government agencies had pegged the carrying capacity of the island at 19,215 tourists at a given time and daily tourist arrivals at 6,405.

April is traditionally a peak month for visitors on the island but the number of visitors was the highest since January 2020, when the travel apprehensions and restrictions due to the COVID-19 pandemic island started to be felt.