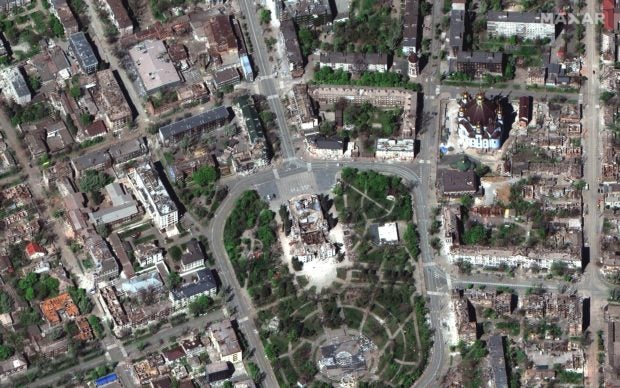 KYIV—Roughly 100 civilians have been evacuated from a besieged steel plant in the eastern Ukrainian city of Mariupol, President Volodymyr Zelensky said on Sunday.

The UN said earlier that a “safe passage operation” was going on at the Azovstal plant, the last holdout in the port city that has endured a Russian blockade since the conflict began on February 24, while the International Committee of the Red Cross said it was “currently participating” in the operation.

Russia’s defence ministry gave a lower figure of 80 civilians, adding: “Those who wished to leave for areas controlled by the Kyiv regime were handed over to UN and ICRC (Red Cross) representatives.”

Neither the UN or the ICRC have said how many civilians they are transporting and it was not immediately clear why the sides had given different figures.

Thousands have been killed and millions displaced since Russia’s invasion, and stories of the harsh conditions in besieged Mariupol have horrified the world.

“Today we finally managed to start the evacuation of people from Azovstal,” Zelensky said in a video address, adding that they were due to arrive in Ukraine-controlled Zaporizhzhia on Monday.

“For the first time there were two days of real ceasefire on this territory. More than a hundred civilians have already been evacuated — women and children first of all.”

He said he hoped the evacuations could continue Monday, adding: “We plan to start at 8 am (0500 GMT).”

One Russian news report put the number of civilians still in the plant at more than 500.

The Russian defence ministry earlier confirmed that civilians were leaving, releasing a video that showed cars and buses travelling in the dark marked with a “Z”, the letter used by the Russian forces in the conflict.

‘Do not be bullied’

Western powers have rushed to send military aid to Ukraine and imposed heavy sanctions on Russia.

“Do not be bullied by bullies,” US Speaker of the House Nancy Pelosi told reporters at a news conference in Rzeszow in southern Poland on Sunday after returning from Ukraine.

“If they are making threats, you cannot back down.”

Pelosi met Zelensky on Saturday, becoming the most senior US figure to visit since the war began. She promised to enact the $33-billion (31-billion-euro) arms and support package announced by US President Joe Biden last week.

“We must use our economic and financial abilities to make Russia pay the price for what it is doing,” he said.

Diplomats in Brussels said the EU would propose phasing in a ban on Russian oil imports over a period of six to eight months.

Russia has been seeking ways to push back against the growing international pressure.

The speaker of the lower house of parliament, Vyacheslav Volodin, suggested Moscow could seize Russia-based assets of countries it deems hostile. “It is fair to take reciprocal measures,” he said.

The conflict in Ukraine has been most intense in the east and south, although there have been Russian missile strikes across the country, mainly targeting infrastructure and supply lines.

Four civilians were killed by Russian shelling in the town of Lyman on Sunday, and another in a nearby town, as Moscow’s forces push deeper into the eastern Donetsk region, regional governor Pavlo Krylenko said.

And three people died in the shelling of residential areas in and around the northeastern city of Kharkiv, regional governor Oleg Synegubov said on Telegram.

Russia has moved to solidify its grip on areas it controls and from Sunday introduced the Russian ruble in the region of Kherson — initially to be used alongside the Ukrainian hryvnia.

“Beginning May 1, we will move to the ruble zone,” Kirill Stremousov, a civilian and military administrator of Kherson, was cited as saying earlier by Russia’s state news agency RIA Novosti.

He said the hryvnia could be used during a four-month period, but then “we will completely switch to settlements in rubles”.

On the front line in the east, Russian troops — helped by massive use of artillery — have advanced slowly but steadily in some areas.

But Ukrainian forces have also recaptured some territory in recent days, particularly around Kharkiv.

One of the areas taken back from Russian control was the village of Ruska Lozova, which evacuees said had been occupied for two months.

“It was two months of terrible fear. Nothing else, a terrible and relentless fear,” Natalia, a 28-year-old evacuee from Ruska Lozova, told AFP after reaching Kharkiv.

Kyiv has admitted that Russian forces have captured a string of villages in the Donbas region and has asked Western powers to deliver more heavy weapons to bolster its defences there.

“Everyone understands that we must guard the line here,” Lieutenant Yevgen Samoylov of the 81st Brigade told AFP as his unit rotated away from the front line near the town of Sviatogirsk.

“We cannot let the enemy move closer. We try to hold it with all our force.”